Rwanda-DRC: Why Balkanisation Talk is Dangerous to Peaceful Co-existence 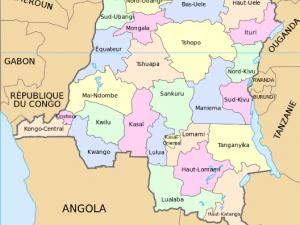 On January 4, a video of two Congolese women carrying a pack of Rwandan coffee in a supermarket in Kampala circulated on social media. In the video, the two women point to the map of Africa, and Rwanda in particular on the ‘Gorillas Coffee’ branded pack.

The duo had made a major discovery –on the map, it appeared Rwanda had already annexed parts of eastern Democratic Republic of Congo, including North and South Kivu, Maniema and Katanga.

To justify their claims, they pointed to the blue map of Rwanda which is centrally placed in the heart of Africa but on the coffee packaging, it had been blown out to cover the aforementioned parts of DRC.

For them, Rwanda has already fulfilled its mission of occupying parts of DRC and this has been tactfully revealed through the Arabica coffee brand produced by Rwanda Coffee Farmers Company.

While this could pass as a funny video by two women somewhere in Kampala, it has circulated widely among the Congolese, especially those in diaspora, who describe it as a ‘serious matter’. By press time, it had been watched by close to 13, 000 people.

The ‘coffee theory’, albeit new to the decades-long so called balkanisation project, is the latest to be added to dozens of other theories to prove that Rwanda is ready to annex parts of Congo.

Similarly, last weekend, André Bokundoa-bo-Likabe, the President of the Church of Christ in the Congo (ECC) told a gathering that Congolese people need to pay attention to the ongoing military operations in Eastern DRC, sensantionally claiming that it could be part of the plot to annex parts of DRC.

On January 10, the Democratic Forces for the Liberation of Rwanda (FDLR), a genocidaire rebel outfit based in DRC which has in recent months suffered serious whipping from the Congolese government forces FARDC also jumped onto the balkanisation bandwagon saying that it was ‘concerned’ by the invaders keen on occupying and annexing parts of DRC.

The Minister of State for Foreign Affairs in charge of East African Community Amb. Olivier Nduhungirehe blames Congolese politicians for advancing the theories, particularly the head of opposition Adolphe Muzito Fumutshi, who in recent weeks has been suggesting that DRC should annex Rwanda instead (before Rwanda annexes DRC) for permanent peace to prevail in the eastern part of the country.

Nduhungirehe said that it was just a matter of time before genocidal forces like FDLR jumped on the bandwagon to support the claims even as pressure mounts on them.

“Obviously all that was missing was the genocidaires FDLR, who have terrorized the Congolese in eastern DRC since 1994, to take advantage of the opening given to them by irresponsible politicians and clergymen,” Nduhungirehe said, referring to the politicians and religious leaders who have been peddling the balkanisation falsehoods.

Reacting to the FDLR pronouncements, Nduhungirehe said that the days of the militia are numbered given recent operations by FARDC which have taken out a big number of the rebels whose senior members participated in the 1994 Genocide against the Tutsi.

But what is an even more surprising, senior Congolese government official have also joined the craze, making insinuations of balkanisation. Nduhungirehe, known for taking no prisoners, has been confronting them one at a time.

In the latest confrontation, Amb. Nduhungirehe took on the Permanent Secretary in the Ministry of Foreign Affairs in DRC, Atoki Lleka, who insinuated on Twitter that Congolese should ‘wake up’ and say no to non-interference.

Nduhungirehe said that Congolese officials and diplomats in office should refrain from endorsing and spreading, among the population, conspiracy theories which are old and ridiculous with the purpose of inciting their own people.

“History teaches us that blowing on the embers of popular fear is dangerous,” he said, while responding to Congolese officials including Senator Amb. Francine Muyumba and the Advisor to the President of the National Assembly and former Ambassador Michael Sakombi who insinuated claims of interference.

Nduhungirehe reminded them that Rwanda debunking the false theories and calling out politicians misleading masses does not amount to interference.

“When Congolese politicians call for waging war on Rwanda and annexing it, any Rwandan official who dares to condemn these inflammatory words “interferes in the internal affairs of the DRC”?” Nduhungirehe asked Muyumba.

But why is it a matter of concern now?

The allegations come at a time when relations between Rwanda and DRC are flourishing. The claims re-emerged last year, with the people behind them claiming that the Rwandan military was already in Eastern DRC.

It was claimed that the ongoing operations conducted by FARDC targeting armed groups are facilitated by Rwanda Defence Force (RDF).

The Minister of Foreign Affairs and Cooperation Dr Vincent Biruta described the claims as ridiculous because RDF has not been to DRC in recent years and does not intend to do so, attributing the allegations to malicious and irresponsible politicians.

To advance the theory, the peddlers of the allegations claimed that President Paul Kagame friendly ties with his Congolese Felix Tshisekedi is a precursor to the grand plan by Kigali to annex parts of the mineral rich country.

In fact, controversial Congolese politician Honoré Ngbanda Nzambo-ko-Atumba, a former Minister and Ambassador under the regime of the former President of the then Zaire, Mobutu Sese Seko, has dedicated his life to advancing the theory that Rwanda is keen on annexing parts of DRC.

Last year when President Tshisekedi announced operations aimed at eliminating armed groups operating in Eastern DRC, Ngbanda Nzambo declared that the operations were part of the covert move to annex DRC which has been longstanding and will materialize under Tshisekedi.

The vanquished politician claims that the key architects of the plan include Azarias Ruberwa, the Minister of Decentralization and Institutional Reforms. In a lengthy document, Ngbanda Nzambo goes on to explain how it will be achieved.

Strangely, it is not Ngbanda Nzambo alone peddling the balkanisation propaganda and backing it up with poorly manipulated theories.

In another embarrassing case, on January 10, Kudura Kasongo, a Director of Cabinet in one of the Ministries shared a document reportedly signed by Francis Gatare of “RDB” giving a brief of progress in annexing parts of DRC.

“We are slowly moving into the regions of Beni, Rubero, Rutshuru, Walikale, Masisi and Goma were you are free to own and claim land of your ancestors,” the tract with poorly written and coined Kinyarwanda slogans leads attributed to  Gatare.

But surprisingly, even as fake as it appeared, the government official did not bother to verify the authenticity of the ‘declaration’ or at least Google to see that Gatare hasn’t been at RDB for a while. The statement was laughed off by many who could see that it is fake.

Mr Gatare has been the CEO of Rwanda Mines, Petroleum & Gas Board (RMB) since February 2017.

Minister Nduhungirehe said that the Director of the Cabinet of a Minister fabricating a false statement riddled with mistakes goes to show how the balkanisation claims are a gangrene eating into the lives of some Congolese politicians, extending to the people.

Previously Rwanda has not taken seriously balkanisation theories, often laughing them off. Recently when Muzito suggested that DRC should wage war against Rwanda in a bid to create peace in the eastern part of the mineral rich country, Rwanda laughed off the pronouncements.

Muzito, during a press conference on December 23 last year in Kinshasa, proposed that DRC might need to start a war with Rwanda, and possibly annex the country in order to fully restore lasting peace.

“We need to wage a war in Rwanda to revive serenity in our community. Rwanda impacts Congolese politics, same as Uganda. We can make peace by threatening Rwanda and occupying parts of its territory and annex it,” Muzito, who was Premier from 2007 to 2012, said.

The war mongering by the politician, who is currently the head of the opposition coalition Lamuka, was denounced in the strongest terms by fellow opposition and coalition members Jean Pierre Bemba and Moïse Katumbi.

Nduhungirehe said the remarks by Muzito, which were not condemned by figurehead and former Presidential contender Martin Fayulu confirmed how Congolese politicians were hell bent on stoking fires between Kigali and Kinshasa –a scenario which replays itself whenever there is peace between the two countries.

Ultimately, Foreign Affairs Minister Dr Biruta said that the utterances of Congolese politicians are irresponsible and baseless and are aimed at creating a malaise in the thriving relations between the two countries –a concern both countries should share.

Having taken office in January this year, President Tshisekedi has proved to be a change maker, not only going after armed groups such as FDLR, Conseil National pour la Renaissance et la Démocratie (CNRD) and RUD-Urunana, but also taking out its top leaders.

Close to 2, 000 people have been handed over to Rwanda since the operations began, including more than 300 militias mainly members of CNRD and over 70 FDLR members.

President Tshisekedi, who has been to Rwanda a couple of times and meets President Kagame at different fora since taking office is also among the facilitators of the Rwanda-Uganda reconciliation process and maintains a forward looking approach to regional issues.

But can a country annex another in this day and age? Not possible. According to scholar and commentator on political issues Tom Ndahiro says it is impossible for a country to annex another or parts of another country. He however says that Congolese politicians have a mission.

“To me, there are people who were happy to see Rwanda and DRC relations remain at the lowest. If you hear someone beating drums of war to annex a country, then you realise there is something shadowy,”

“All these silly claims of balkanisation are coming at time when Rwandan armed groups in that country are getting a thorough beating from FARDC and as these groups are closer to total defeat,” Ndahiro says.

Ndahiro said that most of the perpetrators of the balkanisation theory, including the Roman Catholic Cardinal, have not been on any record condemning FDLR which was a state within DRC state.

“This is a criminal organisation which had turned Congolese in the territories they occupied subjugating the nationals as slaves. This nonsensical noise of balkanisation is from people who are likely to be supporters of genocidaires’ plans to maintain a territory in the DRC,” Ndahiro concludes.