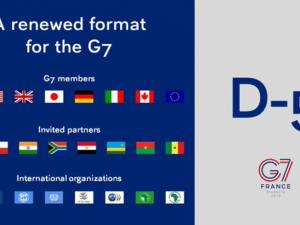 President Paul Kagame is scheduled to take part in the G7 Summit in France over the weekend.

G7, also known as the Group of Seven, is made up of seven countries – which are among the largest industrialized economies of the world.

The summit brings together leaders and policymakers from Canada, France, Germany, Italy, Japan, the United Kingdom and the United States to build consensus and set trends around challenging global issues.

The countries are estimated to represent about 62 per cent of the global net wealth - amounting to about $280 trillion.

Founded in the 1970s, the group meets annually to discuss multiple global issues including environment, security and economy, among others.

As is the custom, the host country invites a select few non-G7 world leaders to what is referred to as ‘the Outreach Session’ where more common issues of concern are discussed.

President Kagame’s participation was confirmed by Olivier Nduhungirehe, the State Minister in Charge of East African Community at the Ministry of Foreign Affairs and International Cooperation.

“He (the President) will address the topics proposed: women entrepreneurship, digital transformation and transparency in public procurement and common fight against corruption,” Nduhungirehe said.

The summit’s events schedule include an informal dinner of G7 leaders to discuss foreign policy and security affairs on Saturday evening, followed by a session on the global economy Sunday morning that was added at the last-minute request of the United States.

The summit will also feature sessions on gender inequality and Africa partnership on Sunday while on Monday the agenda includes climate change, digital transformation before a closing session.