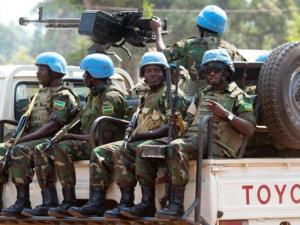 Rwanda Defence Force (RDF) peacekeepers serving in the Central African Republic have repulsed an attack by a militia group there, according to the UN mission.

The United Nations Multidimensional Integrated Stabilization Mission in the Central African Republic (MINUSCA) noted, in a tweet, that peacekeepers from the Rwandan contingent repulsed an attack in Gedze, in the Nana-Mambéré prefecture, and neutralized three elements of the Return, Reclamation and Rehabilitation (3R) militia group.

The Rwandan contingent, as noted, recovered ammunition and weapons, including an AK 47 and five RPG rockets.

As reported, the 3R armed elements targeted a MINUSCA convoy in Gedze, Nana-Mambere prefecture in the northwest of the country.

The development comes after the RDF recently announced that it remains committed to the task of protecting civilians within the mandate of the UN mission in the Central African Republic, and other peacekeeping missions under which Rwandan troops serve.

It follows the death of a Rwandan peacekeeper, Sergeant Major Edouard Nsabiyaremye, who was serving under MINUSCA following an attack on July 13, by elements of an armed group.

The President of the Central African Republic, Faustin-Archange Touadera on Tuesday, July 21, paid his last respects to the fallen RDF peacekeeper.

According to the RDF, the casket bearing the remains of the Rwandan peacekeeper arrived in Rwanda on July 21 and he will be laid to rest at Kanombe Military Cemetery on Friday, July 24.

Formed in 2015, the 3R militia group claims to protect the Peuhl community from attacks by another group, the Anti-Balaka militia.

Ever since it was formed, in the end of 2015, the group is reported to be involved in attacks on UN peacekeepers and civilian communities, primarily in the north west region of the CAR.

The group has gained some control of areas that border Cameroon. Human rights violations by the group are often reported by the UN.

A July 8 UN experts report, among others, notes that although 3R and UPC, another group, have separate chains of command, they share a common background and interests.

Both, it is noted, aim to consolidate and expand control of territory to maximize taxation of transhumance activities.