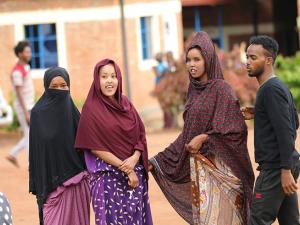 Rwanda will receive the third batch of 120 African refugees from Libya early next month, the UN Refugee Agency has said today.

Elise Vellachallane, the External Relations Officer from the United Nations High Commissioner for Refugees (UNHCR) in Rwanda was part of a delegation that led the media to a tour of the Gashora Transit Camp of African refugees who were evacuated from Libya since September  this year.

The camp hosts 189 refugees who arrived in two batches of 66 and 123 refugees in September and October respectively.

The arrival of the 120 more refugees will bring the total number to 309 refugees.

The Permanent Secretary for the Ministry in Charge of Emergency Management (MINEMA) Kayumba Olivier Rugina told the media, that the facility that hosts them is still being upgraded to give it a capacity of hosting 500 refugees.

The facilities include homes, sport’s courts on top of other entertainment facilities.

The refugees include women who experienced horrible rape experiences which traumatized them to some extent. Men also face the worst experience of torture and mistreatment of all kinds back in Libya. A counseling service was thus started at the camp to help them.

Visiting the refugees today also included UNHCR Region head Clementine Awu Nkwete Salami and African Union diplomats who are in Rwanda for a consultative meeting on the issue of immigrants and refugees.

Diplomats from Sierra Leone and Guinea Conakry  said that already their countries are looking into possibilities of also hosting more refugees from Libya.

Some European countries like Sweden have also started committing to take some of the refugees.

An introduction into Language learning has started in this refugee camp to help them have basics that would help them communicate easily in their future potential host countries. The languages that are taught are English and Kinyarwanda.