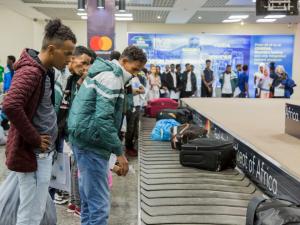 Rwanda received the second batch of African refugees from Libya on Thursday night.

The groups of of 123 refugees are part of the 500 African refuges Rwanda agreed to host under the MoU with UNHCR and African Union signed last month.

They will join another group of 66 refugees who arrived in Kigali late last month, in a move that has seen Rwanda garner international praise for offering temporary respite for refugees from “dangerous and alarming conditions in Libya,” according to the United Nations High Commission for Refugees (UNHCR).

On arrival at the airport, the migrants were led to the waiting buses – ready to transport them to Gashora Transit Center in Bugesera District, Eastern Province.

Speaking to journalists at the airport, the Permanent Secretary in the Ministry of Emergency Management Olivier Kayumba said that everything was in place and all arriving migrants were in good condition.

“They are all fine. They arrived safely. We are accompanying them to Gashora Transit Center where food is waiting for them,” he said.

According to Permanent Secretary Kayumba, the next important step will be monitoring their health conditions.

“You know they have been living in very harsh and unfriendly life. Some could have suffered. We want to screen them and ensure they are in good health,” he said.

Barbara Bentum-Williams Dotse –Deputy Representative in charge of operations at United Nations High Commissioner for Refugees, said she was convinced that the migrants will settle easily in Rwanda – drawing from the experience of the first batch that arrived before.

“We have already introduced English and Kinyarwanda courses at the transit center in Gashora. We believe that they will quickly feel settled,” she said.

In his first comment about the arrival of the asylum seekers who were stranded in Libya and caught in violence, President Paul Kagame said that Rwanda offered to take them in out of a conviction to do good and not to be applauded, urging countries follow suit.