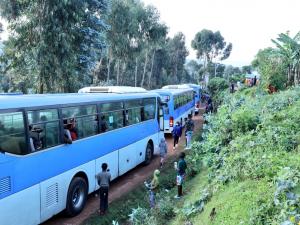 The Ministry in charge of Emergency Management (Minema) has officially kicked off a process of relocating refugees living in high risk zones to low risk camp areas.

The relocation, in collaboration with the United Nations refugee agency (UNHCR) started this Monday morning, September 20, 2021 with over 100 families in Gihembe Congolese refugee camp shifting to their new home in Mahama camp.

Mahama camp is located in Kirehe district and is partially occupied by Burundian refugees who have also since 2020 been returning to their home at free will.

UNCHR Deputy Country Representative, Boubacar Bamba said that the relocation was necessary because of the environmental risks registered in the Gihembe camp for the last 23 years.

“This is for environment reasons, most of the refugees were living in high risk areas and it is the logical option to relocate it at a safer area, which we agreed on with the government,” Bamba said in a brief interview.

These risks, according to the camp managers include increasing ravines in the camp settlement caused by the hilly landscape, heavy rains fall and untapped roof water.

“Though there has not been any recorded incidents of loss of lives, we have cases of injuries when refugees fall into the ravine ditches. Even me I am one of the victims,” Gorretti Murebwayire, the Gihembe camp manager said.

Gihembe camp is home to over 9000 refugees who came from South Kivu region in the DRC and most of them have for 23 years been able to build families and a new life in Rwanda with children attending local schools and accessing health care and skills development programs.

For the next three months, all the Congolese refugees are expected to be completely relocated to Mahama and the land they occupied to be returned to district authorities.

However some with cows to graze and immovable property have asked for assistance to retain their property.

Fidele Kaliningabo who owns three Friesian cows says he earns Rwf3000 per day from milk sales and would like to retain his herding career he has done before coming to Rwanda and while in the camp.

“This is my life and I have no other source of income. I have raised my concerns and by October 4, I will be able to know how I will stay with my cows, ” Kaliningabo said.

Officials responded that in order for Kaliningabo to relocate to Mahama he will have to find a grazing place outside the camp or retain his current location.

They added that any other refugee has a right to stay and remain as an urban refugee with no assistance accredited to refugee camp.

On the other hand women and children currently being relocated to Mahama showed mixed reactions.

“We are going to change life and get used to a new one, but this is good because it was risky to live in this hilly area even if we were born here,” said one refugee student.

One mother said that the change in whether conditions will be her biggest challenge but in terms of amenities and services she said that Mahama would be a better camp settlement.

A visual look at both camps- Gihembe and Mahama, the housing and environment in the former look like makeshift mud houses while in the latter one can see proper planned mud-brick housing.

Mahama is located in a plain landscape 25km far away from the Kirehe town center while Gihembe is located on the sloppy hills of Kageyo in Gicumbi district.