Rwanda responds to US congresswoman on Rusesabagina 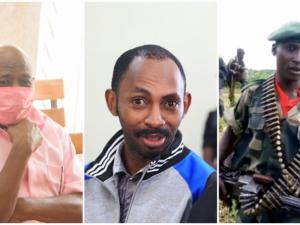 The Government has told Carolyn B. Maloney, a member of the US Congress that the Rwandan justice system is independent and terror suspect Paul Rusesabagina’s arrest was based on key facts that not only are in the public domain but that he has not disputed.

The response comes after the Congresswoman wrote a letter addressed to President Paul Kagame on December 14 requesting for the release and return to the United States of Rusesabagina.

In his letter December 16, the Minister of Justice and also Attorney General Johnston Busingye reminded Maloney that the Rwanda Investigation Bureau (RIB) and the National Public Prosecution Authority (NPPA) have in the past clarified in court and to the media that Rusesabagina was not kidnapped or extradited.

“He departed Dubai voluntarily by private jet and when his plane landed in Rwanda and he voluntarily alighted he was placed under arrest pursuant to a 2018 arrest warrant,” he wrote. 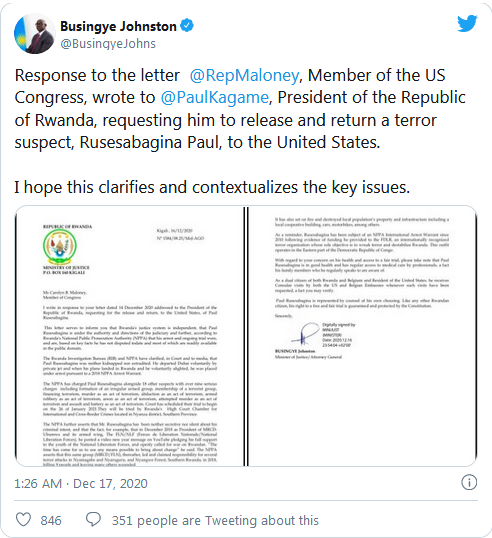 Busingye told the congresswoman that Rusesabagina is not the only suspect.

He reminded that Rusesabagina is alongside 18 others were charged by NPPA with over nine serious charges including formation of an irregular armed group, membership of a terrorist group, financing terrorism, murder, abduction, armed robbery, attempted murder, and assault and robbery all as acts of terrorism.

Rusesabagina has himself, on multiple times, admitted to founding and fundraising for FNL-MRCD, a militia outfit that made incursion into Rwanda at different times, killing people among other atrocities.

The group will be tried at the High Court Chamber for International and Cross Border Crimes located in Nyanza district, Southern Province.

Their substantive trial will begin on January 26, 2021.

Busingye reminded that Rusesabagina has never shied away from his intentions where he used social media platforms like YouTube to spread his terror gospel.

As president of MRCD-Ubumwe and its armed wing, FLN, Busingye said that Rusesabagina posted a video in December 2018 pledging his full support and openly called for war on Rwanda.

In the video, Rusesabagina says “the time has come for us to use any means possible to bring about change.”

“According to NPPA, shortly after that, MRCD/FLN led and claimed responsibility for several terror attacks in Nyamagabe and Nyaruguru and Nyungwe forest, Southern Rwanda killing nine people leaving many others wounded,” Busingye wrote.

Busingye calmed the Congresswoman’s fears over suspect Rusesabagina’s health and access to a fair trial.

“Please take note that Rusesabagina is in good health and has regular access to medical care by professionals, a fact that his family members who he regularly speaks to are aware of,” he wrote.

As a dual citizen of both Rwanda and Belgium and resident of the US, Rusesabagina is also permitted visits from staff from both embassies whenever they request, a fact that Busingye requested Maloney to verify if she wishes.

Meanwhile, in October, the prosecution announced that it would merge Rusesabagina’s case with that of 16 suspects, all of whom former fighters for FLN, to have a joint trial.

Making the announcement, Prosecutor General Aimable Havugimana said that they will also request the court to merge at the substantive phase, the case be merged with that of the two former publicists to the outfit whose case is already ongoing.

The duo is Callixte Nsabimana and Herman Nsengimana who are already on trial at the High Court Chamber for International and Cross Border Crimes located in Nyanza District.