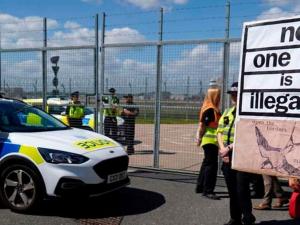 The Rwandan government said on Wednesday it was still committed to taking in asylum seekers sent by the UK under a controversial deal after a first flight was cancelled following a European court ruling.

"We are not deterred by these developments. Rwanda remains fully committed to making this partnership work," government spokeswoman Yolande Makolo told AFP.

"The current situation of people making dangerous journeys cannot continue as it is causing untold suffering to so many," she said.

"Rwanda stands ready to receive the migrants when they do arrive and offer them safety and opportunity in our country."
A first flight was due to take off from Britain for the Kigali late Tuesday but was cancelled after a last-minute ruling by the European Court of Human Rights.

The UK's policy of deporting asylum seekers to a country thousands of kilometres away has been branded "immoral" by church leaders in England and heavily criticised by the UN refugee agency and rights groups.