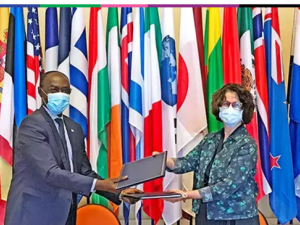 Rwanda this week became a signatory to the Convention on Mutual Administrative Assistance in Tax Matters (MAAC). The treaty is a commitment by Rwanda to comply with international standards from the European Union and Organisation for Economic Co-operation and Development (OECD).

This will enable Rwanda to expand her network of information exchange partners from the current 12 to more than 141. The Convention was developed jointly by the OECD and the Council of Europe in 1988 and amended by Protocol in 2010.

The Convention is a comprehensive multilateral instrument available for all forms of tax co-operation to tackle tax evasion and avoidance. The convention was signed by Amb. François Xavier Ngarambe, Rwanda’s envoy to France, on behalf of Rwanda.

The convention is also a showcase of the transparency of Rwanda’s financial sector in general and more specifically the Kigali International Financial Centre (KIFC).

KIFC seeks to position Rwanda as a preferred financial jurisdiction for investments into Africa and by providing an attractive destination for international investors with a legal and regulatory framework fully compliant with international best practices.

The convention is expected to reinforce the transparency of KIFC and its ecosystem of international investors, financial service providers, private equity funds and fund managers.

The signing represents an important national milestone for Rwanda and the newly-created (KIFC) which is positioning Rwanda as a preferred financial jurisdiction for investments into Africa, officials said.

The treaty ensures that Rwanda complies with international standards from the EU and OECD, and it will enable Rwanda to expand her network of information exchange partners from the present 12 to more than 141.

“This is imperative in the positioning of KIFC as one of the leading financial centres in Africa, as the signing helps to improve our compliance rating, integrity, and transparency of our institutions. We are confident this will help Rwanda secure the benefits of the new cooperative tax environment,” he said.

“To ensure that the MAAC is ratified and entered into force, Rwanda will move to the next steps of completing our required domestic procedures, before depositing the instrument of ratification, acceptance or approval. Everyone involved is committed to ensuring a speedy ratification process that will see the Convention entered into force as quickly as possible,” he added.

Amb. Ngarambe said that the signing is a landmark moment for Rwanda toward the establishment of Kigali as an international financial centre, and the signing is a reminder of the scale of the ambition and determination to work with all global partners to ensure the success for Rwanda.

“With a jurisdiction that adheres to the highest levels of international standards with respect to compliance and transparency, it will allow Rwanda to play a major global role in combating tax avoidance and evasion and underlines Rwanda’s long-standing commitments on these matters,” he added.

Through the signing Rwanda became the 23rd African country to sign the MAAC, joining 141 other countries, including all G20 countries.

Domestically, Rwanda is also establishing a comprehensive legal and regulatory framework for regional and international investors and has passed several new pieces of legislation, such as the law governing mutual legal assistance in criminal matters which will further increase transparency and exchange of information.