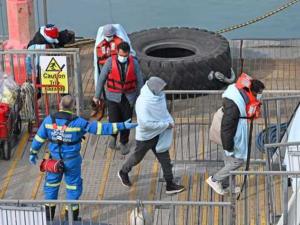 Rwanda has agreed to take in immigrants denied entry into the United Kingdom even as Kenya declined London’s requests to help it ease the burden of unwanted guests.

And as Rwanda and the UK signed the Migration and Economic Development Partnership on Thursday, questions were being asked of the fate of those who will be relocated.

Previous such deals neither prevented the refugees from attempting to return to the territories that rejected them nor assured them of an adequate settlement life in their new homes.

While the deal with Rwanda reflects just how the UK has struggled to seal its borders, especially after voting to exit the European Union, it is expected to allow London to dispense with the burden, at a fee to Rwanda.

The actual number of the migrants to be relocated was not given, but officials suggested that any male migrant caught trying to enter the UK territory illegally by boat or hiding in vehicles will be shipped to Rwanda.

The deal with Rwanda applies to only men. Last year, 28,526 people were caught.
It has now emerged that before making ‘‘the partnership’’ with Rwanda, the UK had approached other countries in the region, including Kenya, which declined the request on a “cost-benefit analysis,” according to a diplomatic source who spoke to The EastAfrican in confidence.

Kenya, which already hosts about 800,000 refugees, most in camps and others in urban centres across the country, declined the offer to take in the migrants citing an already burdensome number in the country, the official said.

“On a cost-benefit analysis, the money being offered is too little to manage these numbers. If refugees were a big business, maybe we would be rich. But it costs more to host them.

“Even if a country is paid, funds go to schools and other welfare stuff. In three to five years, this becomes your problem because what you need are jobs and other elements for basic sustainability,” the official told The EastAfrican.

The UK will also pay up to €120 million ($160 million) for support services to Rwanda. According to UK authorities, refugees mainly from African countries with broken governance systems have become a burden, costing up to $6.3 million per day to deport and also patrol the borders.

“Before Christmas 2021, 27 people drowned, and in the weeks ahead there may be many more losing their lives at sea, and whose bodies may never be recovered. Around 600 came across the Channel yesterday. In just a few weeks this could again reach a thousand a day,” The UK government said on Thursday, indicating the asylum programme was no longer sustainable.

The new programme, London argues, is meant to “to break the business model of people-smuggling gangs, step-up our operations in the Channel, bring more criminals to justice and end this barbaric trade in human misery.”

Since its exit from the European Union, the UK doesn’t have a common migration policy with EU members, forcing it to seek other partners to settle the unwanted illegals.

While announcing the deal on Thursday, UK’s Prime Minister Boris Johnson, explained that Rwanda is a better host because “it is one of the safest countries in the world, globally recognised for its record of welcoming and integrating migrants and it will have the capacity to resettle tens of thousands of migrants in the years ahead.”

But he also suggested that even those among those caught from boats who end up getting asylum, will still be settled elsewhere.

“This means that the economic migrants taking advantage of the asylum system will not get to stay in the UK while those in genuine need will be properly protected with access to legal services in Rwanda supported by the funding we are providing,” he added.

The deal had been in the works for months and was signed on Thursday by UK’s Home Secretary Priti Patel and Rwandan Minister for Foreign Affairs and International Co-operation Vincent Biruta.

But refugee agency UNHCR said that it was not a party to negotiations between London and Kigali, which it is understood were part of an economic development partnership.

“UNHCR remains firmly opposed to arrangements that seek to transfer refugees and asylum seekers to third countries in the absence of sufficient safeguards and standards,” said UNHCR’s Assistant High Commissioner for Protection, Gillian Triggs, describing the arrangements as shifting asylum responsibilities and evading international obligations that are “contrary to the letter and spirit of the Refugee Convention.”

Officials in Kigali say migrants will be entitled to full protection under Rwandan law, equal access to employment, and enrolment in healthcare and social care services as well as the issuance of necessary identification documents.

And Secretary Patel explained to the media that “migrants who arrive in the UK via illegal means such as small boats and human traffickers will be relocated,” to Rwanda.

This is not the first time Rwanda has opened its doors to refugees. In 2014 it signed a deal with the government in Tel Aviv to take in African migrants who had been denied residence in Israel creating a controversy as well.

A 2015 study by the International Refugee Rights Initiative found that many of those settled in the two countries had been given little support and no labour rights. Some ended up begging on the streets. In 2021, Rwanda reached a deal to host migrants refused entry into Denmark, in exchange for a continuous arrangement to support its social systems to host refugees.

Rwanda also took African refugees stranded in inhumane conditions in Libya, after failing to make the crossing to Europe. This programme too was questioned on whether it could dissuade the migrants from trying to flee to Europe again. After the deal with the UK this week was announced, both governments faced criticism.

Besides the open arms, Rwanda says the deal excludes asylum seekers from any bordering countries and that it will decline those with criminal records.