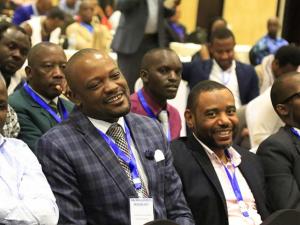 Tanzania has pledged to ease business environment for Rwandans wishing to do business in or with the neighboring country, for mutual benefit of both countries.

On the table is the removal of existing trade barriers to ease doing business and forging investment partnerships.

Rwandan businesspeople at the meeting said those who want to set up businesses in Tanzania are not facilitated enough.

Fred Seka, president of the Federation of East Africa Freight Forwarders, said that he registered his company, Gorilla Logistics in Tanzania in 2016, but he is yet to receive a license to date.

“We are not informed why the process has delayed,” he said.

“There have been some improvements in trade facilitation whereby unnecessary non-tariff barriers were removed.  However, on the operation side, there are some challenges such as difficulties faced by Rwandans to effectively own and run a business in Tanzania”.

The CEO of the Private Sector Federation (PSF), Stephen Ruzibiza, said the number of weigh bridges reduced from seven to three, which brought down the time that trucks carrying goods spend on the roads.

“But there are still some challenges, such as facilitating freight forwarders to access the port, and the High Commissioner of Tanzania to Rwanda has promised us that we will continue discussing them so that they get addressed,” he said.

Amb. Ernest Jumbe Mangu, the Tanzanian top diplomat to Rwanda, said that the complaints raised by the business community will be considered accordingly.

“The two governments also expect to see exponential growth of cross-border trade as trade is a means by which we are able to bring prosperity to our people,” said the envoy.

Soraya Hakuziyaremye, Rwanda’s Minister for Trade and Industry said Rwanda and Tanzania are important trading partners with a firm commitment to increase trade and cooperation through their joint membership of the East African Community.

She said statistics reveal that trade between the two countries has averaged 14 per cent of Rwanda’s trade within the EAC in the last 5 years, indicating that a significant amount of this trade are imports (95 per cent) from Tanzania while Rwanda’s exports represent 5 per cent.

The now fully functioning Single Customs Territory (SCT), Minister Hakuziyaremye said, is a good testimony on how delays in clearance of goods can be tackled significantly.

“The implementation, that started in 2014, helped transit time from Dar es Salaam to Kigali reduce from 17 days in 2010 to between 3 to 4 days in 2018. Transport costs have also significantly reduced,” Hakuziyaremye stated.

“Currently, the port of Dar-es-Salaam handles over 85 per cent of cargo destined for or transiting through Rwanda. It is, therefore, important to maintain this relationship since it mutually benefits us all”.