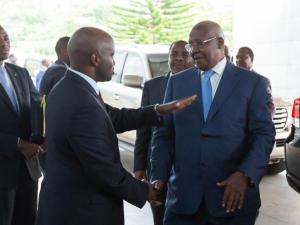 The Ad Hoc Commission on the implementation of the Luanda Memorandum of Understanding between Uganda and Rwanda has kicked off in Kigali as the two countries attempt to normalise relations.

The meeting, which is bringing together ministers and officials from both countries, is a follow up on the Luanda MoU signed by both countries in August last year, committing to resolving their poor relations.

On Friday, both delegations entered the Ministry of Foreign Affairs conference room, in Kigali, at 2:08 pm, and immediately embarked on opening remarks after which members of the media would be asked to leave. T

The Ugandan delegation is led by Sam Kutesa, Uganda's Minister of Foreign Affairs.

The meeting was supposed to have started in the morning.

Present also are top officials from the facilitating countries - Angola and DR Congo.

The Luanda MoU was inked by President Paul Kagame and his Ugandan counterpart Yoweri Museveni.

Its signing was witnessed by the host President João Lourenço, Félix Tshisekedi of DR Congo and Dennis Sassou Nguesso of Congo Brazaville.

Under the agreement, Rwanda and Uganda were among other things called upon: to protect and respect the rights and freedoms of nationals of the other party residing or transiting in their national territory, and to refrain from engaging in actions that destabilize the other party (or actions perceived to) such as financing, training and infiltration of destabilizing forces.

Rwanda blames Uganda for arbitrarily imprisoning and torturing hundreds of its citizens that are in Uganda’s territory, as well as harbouring armed anti-Rwandan elements.

The head of Rwanda's delegation, Amb. Olivier Nduhungirehe, the State Minister in Charge of East African Community, on Thursday urged that; “The full implementation of our commitments is key to the success of this process.”

Since the August 2019 Luanda Agreement, three Quadripartite summits were held, the latest of which happened in Angola in February this year and resolved that Uganda and Rwanda would release nationals of each country held and lists were submitted to facilitate the objective.

The next quadripartite meeting is meant to take place on February 21.