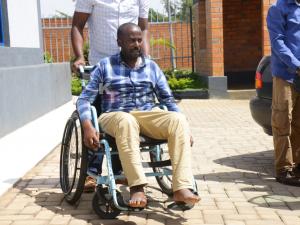 The Minister was reacting to Amnesty’s statement that pushes Rwandan authorities to release Jackie Umuhoza – a Rwandan woman who was on November 27, 2019, arrested and detained over “treason and espionage” according to Rwanda Investigation Bureau (RIB).

In a tweet after her arrest, RIB confirmed Jackie Umuhoza was detained at Remera RIB station in Gasabo district in the capital Kigali.

Umuhoza is a daughter of Deo Nyirigira – a Rwandan pastor living in Uganda whom Rwanda says is a chief recruiter of Rwanda National Congress (RNC) – a terrorist organization headed by Kayumba Nyamwasa.

Nyirigira is reportedly the current coordinator of RNC’s “Uganda Province”.

While Rwanda accuses Uganda of conniving with RNC in torturing, holding incommunicado several Rwandans in Uganda illegal cells, Minister Nduhungire wonders how, for the past three years, Amnesty kept a deaf ear – despite evidence of Rwandan victims of torture being aligned before media.

“Dear @AmnestyEARO, you should have the decency to keep quiet. For the past 3 years u never wrote any single message to condemn the illegal arrest, incommunicado detention & torture of hundreds of Rwandan citizens in #Uganda. And now, u have the guts to condemn a lawful detention!,” Minister Nduhungirehe reacted in a response to Amnesty’s tweet on Tuesday.

Uganda has remained silent on the issues Rwanda presented to it showing its hand in activities meant to destabilize Rwanda.

Appearing on a special end of year interview on Rwanda Broadcasting Agency (RBA) on December 31, 2019, President Paul Kagame commented on the earlier message he received from President Museveni’s special envoy Ambassador Adonia Ayebare, saying there are more things to look into before determining whether the message carried hope or not.

The President however acknowledged that there is some progress made, right from the time the two countries met in Luanda, Angola, in August last year and the subsequent meetings that focused on the implementation of the Luanda Memorandum of Understanding.

Recently, President Yoweri Kaguta Museveni of Uganda said in a New Year message that Uganda will do its “share of the normalization of the relations between our two countries”.