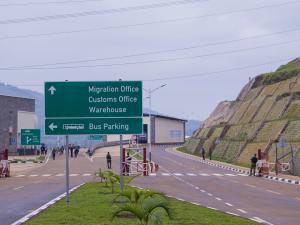 The Government of Rwanda has announced Monday, January 31, 2022, as the day the Gatuna One Stop Border Post will reopen, nearly three years after it was closed on February 28, 2019- the latest of the moves that have sent strong signals that relations between Rwanda and Uganda are moving towards normalization, following the visit of Lt Gen Muhoozi Kainerugaba last week.

Gen. Muhoozi, a Senior Presidential Adviser on Special Operations and Commander of Land Forces of the Uganda People’s Defence Forces (UPDF), visited Rwanda on 22nd January 2022, where he met President Paul Kagame in Kigali to discuss bilateral ties between the two countries which had deteriorated further since the 4th Quadripartite Summit held at Gatuna/Katuna on February 21, 2020.

President Kagame and Gen. Muhoozi agreed to take practical steps towards resolving issues that have caused tensions between Rwanda and Uganda over the last five or so years. The reopening of the border, which Rwanda said closed to prevent more Rwandans from going to Uganda, for their own safety, was announced by the Ministry of Foreign Affairs and Cooperation in the wee hours of Friday, January 28.

“Following the visit to Rwanda of Lt Gen Muhoozi Kainerugaba, Senior Presidential Adviser on Special Operations and Commander of Land Forces of the Uganda People’s Defence Forces (UPDF) on 22nd January 2022, the Government of Rwanda has taken note that there is a process to solve issues raised by Rwanda, as well as commitments made by the Government of Uganda to address remaining obstacles.”

“In this regard and in line with the communique of the 4th Quadripartite Summit held at Gatuna/Katuna on 21″ February 2020, the Government of Rwanda wishes to inform the public that the Gatuna border post between Rwanda and Uganda will be re-opened from 31st January 2022.”

“As it is the case for other land border posts in the country, health authorities of Rwanda and Uganda will work together to put in place necessary measures to facilitate movement in the context of COVID-19.”

“The Government of Rwanda remains committed to ongoing efforts to resolve pending issues between Rwanda and Uganda and believes that today’s announcement will contribute positively to the speedy normalization of relations between the two countries.”

The move to reopen the border, which has been among the key issues at the centre of relations between the two countries, has sent a strong signal that the neighbours could be moving towards resolving the issues that have crippled relations in recent years.

On the other side, Kampala has made heavy changes in the security apparatus, removing some of the individuals accused by Rwanda of being behind acts that target innocent Rwandans in Uganda, notably Maj. Gen. Abel Kandiho, the former head of the Chieftaincy of Military Intelligence (CMI).

Maj. Gen Kandiho was removed from his position and posted to South Sudan as a special envoy and replaced by Maj Gen James Birungi at CMI. He had been accused by Rwanda for being behind the witch-hunt targeting Rwandans inside Uganda, arbitrarily arresting them on accusations of espionage and detaining them incommunicado. He was also accused of working with subversive groups looking to destabilise Rwanda.

However, Kigali has remained cautious in its praising of Kampala’s efforts, seeking for more actions and accountability, particularly regarding the safety of Rwandans inside Uganda. On January 27, Ugandan authorities dumped 58 Rwandans, including 47 men, 6 Women and 5 Children and 1 Burundian, at the Kagitumba One Stop Border Post.

Rwandan authorities maintain that the targeted people are Rwandans living in Uganda, who traveled there legally or Ugandan Banyarwanda (Ugandans of Rwandese origin), who are wrongfully arrested, detained and dumped by the border. The victims say they are detained incommunicado, tortured and deprived of their belongings.

President Kagame has previously said that the safety of Rwandans has been his biggest concern and he raised the matter with his Ugandan counterpart, President Yoweri Kaguta Museveni, on different occasions, but in vain. Sources privy to developments between the two countries indicate that a summit of leaders could be in the offing in the coming days.