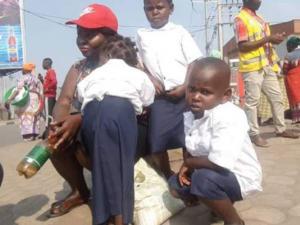 On the first day of the academic year, hundreds of Rwandan students have been stopped from crossing the border into Goma in the Democratic Republic of Congo over fears of Ebola spreading.

Many pupils opt to study in French-speaking Goma because tuition fees are more reasonable there.

Schools and colleges were on holiday when Rwanda’s health minister warned students to enroll in Rwanda, where English is the main language of tuition.

She said that officials wanted to prevent the spread of the virus after four cases were recorded in Goma, a major commercial hub, in late July and early August.

The virus has not gained a foothold in Goma, but Rwanda has not been allowing its citizens to go to the city since early August – though Congolese citizens have not been prevented from crossing into Rwanda.

A Rwandan parent who tried to accompany her child to school in Goma said that despite meetings with authorities on the issue, no solution was reached.

“Our children have always studied in Congo, because it is cheaper. Will I get here a French system school for my child who is in their fifth year at secondary school? No,” she told the BBC.

Cecile Ahaji, 19, had similar concerns: “They want us to study here in Rwanda, but I cannot study here because I have never studied in the English system, I have always been studying in Congo.”

Eighteen-year-old Ineza Tania was upset that her Congolese counterparts were able to come over to Rwanda: “Does Ebola target only Rwandans? So, are the Congolese who are allowed to cross not going to bring it to us? We live together!”

Over 2,000 people have died since the Ebola outbreak began in eastern DR Congo in August last year.