Rwanda’s Kagame in DRC for conference on gender violence 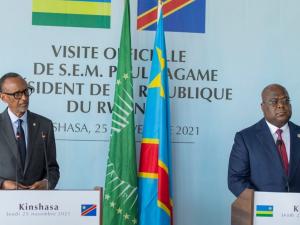 Rwanda’s President Paul Kagame on Thursday arrived in the Democratic Republic of Congo to attend a conference aimed at fighting violence against women.

The Men’s Conference on Positive Masculinity aims at “involving men in leadership to engage other men and boys in efforts to end violence against women and girls,” according to the African Union website.

The conference seeks to tackle issues of sexual violence, early marriage and pregnancy, female genital mutilation and other harmful cultural practices, limited access to land and other resources, and women's participation in decision-making.

On arrival, President Kagame and DRC Head of State Felix Tshisekedi held a closed-door meeting. They, however, did not divulge details about the talks with Kagame only saying that they touched on “relationship and cooperation between our two countries.”

After the closed-door meeting, Kagame congratulated Tshisekedi on the initiative meant to fight gender violence.