S. Sudan among countries most struck by extreme weather 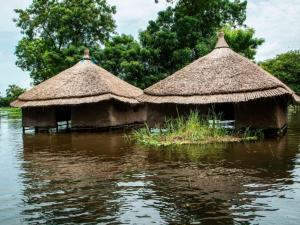 The Nile river overflowed due to continuous heavy rain in Bor, central South Sudan in August 2020. The country ranks eighth among most impacted by hostile weather. PHOTO | AFP

South Sudan was among countries most impacted by extreme weather events in recent years according to the global Climate Risk Index 2021. The index ranks countries according to their vulnerability both in terms of fatalities and economic loss.

South Sudan, which ranks eighth among the most affected countries, suffered abnormally severe flooding following heavy rainfalls from June 2019 until the end of the year.

The country required $61.5 million to respond to immediate flood-induced damage that affected over 900, 000 people; 620, 000 of whom required immediate humanitarian assistance.

The floods damaged 74,000 hectares of cultivated land amounting to a loss of over 70,000 tonnes of cereal. Then, bush fires fanned by gusty winds intensified in May that year gutting four villages and killing dozens, and injuring hundreds more in the Western Bahr el Ghazal region.

The Climate Risk Index (CRI), developed by think tank Germanwatch, quantified impacts of extreme weather-related loss events in 2019 and long term between 2000-2019. The index shows that over 475,000 people lost their lives as a direct result of more than 11,000 extreme weather events globally and losses amounted to around $2.56 trillion.

Eight out of the ten countries most affected by the quantified impacts of extreme weather events in 2019 belong to the low- to lower-middle income category. Half of them are Least Developed Countries. Within the region, Sudan also ranked high at number 11, Kenya followed closely at number 25, then Uganda at position 31, followed by Rwanda at number 42. Burundi was at position 57, Tanzania at position 67, Ethiopia at 72 and Djibouti at position 75.

The catastrophes were the result of storms and their direct implications — precipitation, floods and landslides as well as droughts and wildfires.

Cumulatively, between 2000 and 2019 — the years covered in the report — most African countries were badly hit with Mozambique, Zimbabwe, Malawi, South Sudan and Niger being most affected by the impacts of extreme weather events on the continent. Globally, between 2000 and 2019, Puerto Rico, Myanmar, Haiti and Bahamas were most affected. In March 2019, the intense tropical Cyclone Idai hit Mozambique, Zimbabwe and Malawi, causing over 1,000 fatalities, catastrophic damage and a humanitarian crisis in all three countries.

Of the ten most affected countries in 2019, six were hit by tropical cyclones. And recent science suggests that the number of severe tropical cyclones will increase with every tenth of a degree in global average temperature rise.

The think tank calls for the strengthening of the resilience of the most vulnerable against different types of risk like climatic, geophysical, economic or health-related.