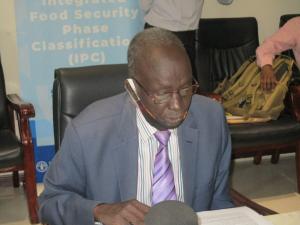 The 23-page report dubbed as “Food Security Situation in the Republic of South Sudan,” compiled between October and November 2020, showed the food security, and nutrition situation has deteriorated in the country.

“The food security, and nutrition situation has deteriorated because of pockets of insecurity that led to population displacement, low crop production due to climatic shocks such as floods and droughts, and the on-going macro-economic crisis, the effects of COVID-19 pandemic, pests such as desert locusts,” said Isaiah Chol Aruai, Chairperson for South Sudan National Bureau of Statistics during the release of the report in Juba.

The government official called for immediate scale-up humanitarian assistance to rescue the worsening situation in the country.

“Seasonal deterioration of acute malnutrition is expected during the lean season due to increased morbidity, high food insecurity, and poor infant and young children feeding practices,” he said.

The report comes after two independent reports published by the IPC Global Support Unit last week which indicated that tens of thousands of people are likely to face famine conditions in Pibor county.

In this situation, many families are experiencing high levels of acute malnutrition and even mortality in five counties (Akobo, Aweil South, Tonj East, Tonj North and Tonj South), some communities are facing catastrophic conditions, the independent analysis found.

It stated that around 1.4 million children aged between 6 months and 5 years are expected to be acutely malnourished in 2021 and will need life-saving treatment.