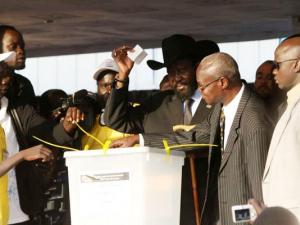 The South Sudan government wants a referendum to resolve dispute over the number of administrative units that the country should have, placing another hurdle on the path to forming a unitary government come February 2020.

The government says this would end a ‘political game’ being played by its rivals led by Dr Riek Machar’s SPLM-IO over the number of states. President Salva Kiir increased the number of states from 10 to 32 states in 2015 against the wishes of his partners in the revitalised peace agreement; other parties wanted 21 states.

Speaking after the regular Council of Ministers Meeting in Juba on Friday, Cabinet minister Martin Elia Lumoru dismissed ongoing inter-party negotiations on the number of states, saying the decision should be left to local populations.

“The president shared his concern with members of cabinet all of whom spoke in favour of 32 states. Only a referendum can reverse the structures currently in existence to avoid crisis and even insecurity,” said Mr Lumoru.

The number of states and formation of an integrated army are the two sticking points that have forced the postponement of formation of a transitional government under the 2018 peace agreement. It was to be formed on May 12, 2019, then it was moved to November 12, 2019, and later postponed to February 2020 after President Kiir and Dr Machar agreed on a 100-day extension.

So far events on the ground suggest this deadline may be missed following delays in disbursing $40 million to activate the security arrangement. Fixing a referendum before February would also be a tall order due to funding constraints the government is facing.

Last week, a two day Igad Consultative meeting ended without the parties agreeing on the number and boundaries of states. SPLM-IO accused the government of repeatedly rejecting proposals brought by mediators.

The government suggested at the meeting that the number of states should actually be more, between 35 and 40.

However, South Africa’s Deputy President David Mabuza, who chaired the meeting, said both sides had agreed to meet again after 10 days, suggesting next week.

A former minister of National Security and member of G10 Majak Agoot said a referendum was not possible because majority of South Sudanese people had been displaced.

“A referendum conundrum is either dishonest or disingenuous. Why? In Equatoria, a 1/3 of population are refugees. In Upper Nile, a significance portion are refugees. Who will vote then? Jieng? Will it be credible,” he said in a tweet.

The executive director of Organization for Responsive Governance Rajab Mohandis said the country should have the 21 old districts in compromise.

“These boundaries are not contested. Reverting to them and then putting this forward for finalisation in the constitution making process would be better given the polarization in the country is not conducive for a referendum,” said Mr Mohandis.