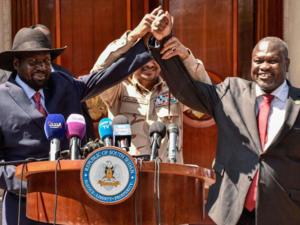 Representatives of South Sudan’s parties to the 2018 revitalized peace agreement have agreed to end the prolonged stalemate on formation of states governments and reconstitution of the National Legislative Assembly.

“The meeting also resolved that the president proceeds to establish the Revitalized Transitional National Legislative Assembly and the Council of States,” Cabinet Affairs Minister Martin Elia Lumuro said in a press statement.

Mr Lumuro added that the meeting also tasked the unity government to hold a national conference in Juba for all communities of Upper Nile State to discuss ways and means of ending tribal differences in the state, prior to the final decision on the appointment of their governor.

According to the statement, President Kiir is expected to issue a decree on the decisions reached.

In September this year, the peace monitoring body called on peace parties to quickly expedite the implementation of the pending tasks agreed in the accord.

Among the major concerns raised by the Reconstituted Joint Monitoring and Evaluation Commission was the need for a quick resolution on the establishment of States and Local government.

It also called for a speedy reconstitution of the Transitional National Legislative Assembly (TNLA) as per Article 1.14.2 of the Revitalized Peace Agreement.

According to the 2018 peace deal, the national parliament and the Council of States shall be reconstituted.

It stipulates that the parliament shall be expanded from 400 to 550 members.

The new peace accord states that the reconstituted TNLA shall, in the conduct of its business, support the agreement and enact legislation that enables and assists the transitional processes and reforms described in the accord.

It is mandated to make laws and hold the government to account for its policies, actions and expenditure, and is tasked to run concurrently with the new unity government until elections are held.

However, another critical task impeding the full formation of the unity government is the training and unification of the necessary forces to safeguard the 2018 revitalized peace agreement.

The forces cantoned in various training sites across the country are awaiting graduation and deployment.

But the Joint Defense Board—the body tasked with implementing security arrangements in the peace deal—said it is constrained by a lack of funds.