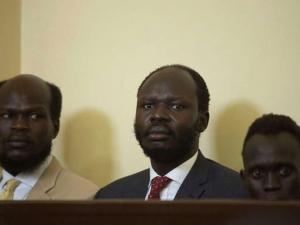 The order, dated January 1, 2020, included a list of 30 inmates most of who had been imprisoned on minor offences and had shown good conduct while in detention.

But it also included Peter Ajak Biar and Keribino Agok Wol, critics of President Kiir’s regime. The two were detained in July 2018 before they were jailed in June 2019.

Mr Biar, 35, a PhD student at Cambridge University, had called on top leaders in Juba to resign and give the younger generation a chance to lead the country.

Mr Wol is a renowned businessman and philanthropist. The two and four others were arrested in 2018, accused of fuelling subversion. The High Court in Juba jailed Biar for two years and Wol for 10 years.

Four other co-accused were each jailed for five years. Their detention was criticised with Amnesty International demanding their immediate release.

It was not clear whether President Kiir was reacting to the criticism. But he had visited the South Sudan Central Prison in Juba on Christmas eve and pledged to release inmates with minor offences.

Mr Biar was accused of incitement and disturbing the peace through his media interviews during a stand-off between inmates and guards at the National Security Service (NSS) headquarters on October 7, 2018.

Mr Wol was accused of masterminding subversive activities against the government. Mr Wol was detained in April 2018 at the Blue House, the headquarters of NSS.

According to Human Rights Watch, an international non-governmental organisation, since the outbreak of South Sudan conflict, government security forces have targeted people seen to oppose the government.

These include human rights defenders, journalists, and members of political opposition. They are often held for long periods without access to lawyers or family visits.

The country is facing critical 50 days after an extension of time needed to form a transitional government of national unity between President Kiir and rebel groups.

A peace deal signed in September 2018 required initial six months to form such a government. This was, however, postponed twice after President Kiir and his former Vice-President Riek Machar failed to agree.

Part of the deal was to end hostilities, reform the military and release political prisoners. In September last year, President Salva Kiir ordered immediate release of prisoners of war and detainees in line with the peace deal.

President Kiir directed the Chief of Defence Forces to release prisoners of war and detainees under the supervision of the International Committee of the Red Cross.