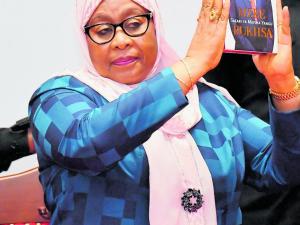 Speaking in Zanzibar, where International Women’s Day was marked nationally, President Hassan said the focus was on the global Covid-19 pandemic, and how Tanzania should cope; rising oil prices; women in decision-making positions, and efforts to end gender-based violence.

The theme of this year’s International Women’s Day was “Gender Equality Today for a Sustainable Tomorrow”. However, the national event in Zanzibar carried the themes “A Generation of Justice and Equality for Sustainable Development, Come Forward to be Counted” (Tanzania Mainland), and “Focus on Gender Equality to Address Climate Change for Sustainable Living” (Zanzibar).

During the occasion, the President of Zanzibar, Dr Hussein Mwinyi, outlined measures his government is taking to ensure that gender equality is taken into account, including empowering women economically, and increasing their number in the government.

On economic empowerment, President Hassan recalled when she officially inaugurated the national committee on the implementation of Tanzania’s plan for an equitable generation in Dodoma in December 2021.

The Head of State said yesterday that she would lead the way in the implementation of the second economic zone for women, which encourages, among other issues, the liberation of women from the informal economy.

“We are going to formalise this sector for women and others to ensure that they play a bigger role in economic development,” she noted.

She said for a woman to be economically free, she should be in good health, and that is why the two governments have been making efforts to move health services closer to the people.

President Hassan also emphasised the establishment of community development colleges at the district level to provide opportunities for women to build their capacities.

On capital, she said that both governments have worked hard to establish various funds and put in place a favourable environment for savings and credit cooperative societies (Saccos) to facilitate women’s access to capital.

“There are capital outlets that exist from the grassroots to the regional level, and we hope that they will encourage more women to do business of any kind without worrying about where to get capital.

“We are going to invest in each region…we have already worked with NMB Bank Plc and CRDB Banks Plc, which have agreed to set aside capital for each region, and we will closely monitor how the funds are spent,” she said.

President Hassan noted that these were not allocations, but interest-free loans that would be issued to women in every region.

Commenting on the Covid-19 crisis and the economic situation in general, President Hassan said food crops Tanzanians have been cultivating have presented them with commercial opportunities in other countries.

“In that sense, there is a very large market for these products. I say this to show an opportunity that came with Covid-19, and the work that lies ahead of us women.”

She also said that the war between Russia and Ukraine has led to rising oil prices, noting that Tanzania has already begun feel the effects, adding that, “Prices of almost all products will rise.”

For his part, Dr Mwinyi said his government would do everything possible to help women in various fields.

“We are supporting women in all economic spheres, and will also support them in political leadership. We will increase the number of political leaders and executives in government,” he promised.

Dr Mwinyi added that he would continue to oppose abuse of women, saying that this is a big problem that needs to be addressed as a matter or urgency.

“I have no doubt that if we work together, we will win.

“We will place greater emphasis on eliminating various forms of violence against women, especially those in rural areas, and also improve social services, reduce maternal mortality, as well take water closer to women,” he said.

Ms Janet Rithe, the spokesperson for Social Welfare, Women and Children with the opposition ACT-Wazalendo, said greater efforts should be made to ensure equal opportunities in representation and decision-making bodies.

She said the government should put in place effective mechanisms to ensure that at least 30 percent of all domestic procurement is awarded to businesses owned by women entrepreneurs.

In addition, the party said there is a need to facilitate and promote small businesses by offering them tax relief, among other measures.