Samia angered by smell of fraud in Sh12.2 billion projects 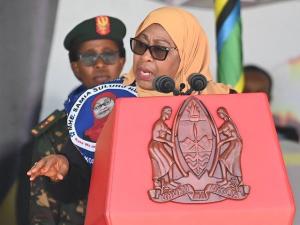 This was at a live broadcast event to end the 2022 Uhuru Torch Races in Bukoba District, Kagera Region as the country also marked the 23rd anniversary of the death of founding President Julius Nyerere.

Briefing the President, the Minister of State in the Prime Minister’s Office--Labour, Youth, Employment and the Disabled, Prof Joyce Ndalichako said the projects were part of 1,293 projects worth Sh650.8 billion inspected during the Uhuru Torch Races.

“The Prevention and Combating of Corruption Bureau (PCCB) and the Zanzibar Anti-Corruption and Economic Crimes Authority (Zaeca) were tasked to investigate the poor execution of these projects and reports will be handed to you [Ms Hassan] today,” she said.

Prof Ndalichako said the projects were identified in 43 councils and investigations of possible corruption, embezzlement and fraud had been ordered under regional authorities.

Gracing the climax of the 2022 Uhuru Torch races at the Kaitaba Stadium in Bukoba District yesterday, President Hassan directed PCCB and Zaeca to thoroughly investigate the projects and take appropriate legal measures immediately.
“Negligence and irresponsibility can no longer be tolerated because they lead to corruption and fraud. We are supposed to be accountable and step up our anti-corruption fight,” she said.
“I should commend leaders of the 2022 Uhuru Torch races and all those who supported them in rejecting corruption and fraud-tainted projects,” she added.

Ms Hassan was dismayed by the growing tendency of waiting for Uhuru Torch races and activities of the Controller and Auditor General for rot in execution of projects to be exposed.
“It is high time we reflected on our anti-corruption crusade. Tanzanians must take matters into their own hands and reject shoddy work,” she said.

However, she said despite doing a good job, PCCB and Zaeca needed more support from institutions, challenging the organisations to assess themselves from the headquarters to the council level.
“How come irregularities have to be exposed by Uhuru Torch races while there are leaders in the respective areas? This is not good, leaders should be accountable in supervising citizens’ tax brought to the grassroots for funding their development,” she said.

The Head of State said the Transparency International report released in January 2022 showed that Tanzania was among six African countries with good anti-corruption progress.

However, she said the recognition was not reflected at the ground level where efforts made by the Union and Zanzibar governments in resource allocations to fund development projects are sabotaged.
“It is disappointing that leaders give tenders to bogus contractors with corruption records, thieves and negligent individuals leading to the failure in efficient implementation of projects,” she said.

Regarding the Ebola outbreak in neighbouring Uganda, President Hassan urged Tanzanians to keep vigil and take precautionary measures against the disease as advised by health experts, “This is because prevention is better than cure. Also, your health is your capital.”

Welcoming President Hassan, Vice President Philip Mpango said climate change was a major challenge facing Tanzania and the world.
“I would like to ask your permission that environmental related projects should be inspected in every district during the annual Uhuru Torch races for the benefit of future generations,” Dr Mpango said.

Reading the 2022 Uhuru Torch report, race leader Sahili Geraruma said the projects’ failure to realise the value for money and excessive use of funds from the public and donors were among the shortfalls recorded in the 195 days race.

“Others include implemented projects being contrary to what was agreed in the legal contracts, making payment to contractors in the absence of project’s certificates of completion and incompliance with public fund’s expenditure and public procurement procedures,” he said.

According to him, tax evasion especially withholding tax, the use of poor construction equipment therefore contravening the civil engineering principles such as the use of untreated timber in the manufacture of windows, doors and roofing were the other recorded challenges.
https://www.thecitizen.co.tz/tanzania/news/national/samia-angered-by-sme...