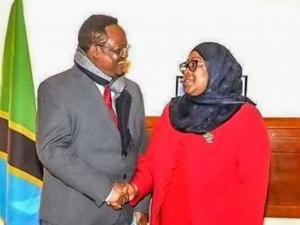 Tanzania’s President Samia Suluhu is increasingly distinguishing herself as an adept political chess player. In the 11 months she has been at the helm in Dodoma, she has put the country back on the world map, moving from Covid denialism to acceptance and vigorous vaccination.

She has instituted policy and diplomatic efforts to put the Covid-ravaged economy on a growth trend, wooed investors with tax and other trade-related concessions, and continued pushing the projects her predecessor John Magufuli had started.

But it is human rights, freedoms and democracy that present the litmus test for Tanzania’s first woman president. As the successor of Magufuli aka Bulldozer, a man seen to have constricted rights and freedoms, Samia has been under pressure to institute reforms.

This week, she toured Europe in her second outing outside the continent since she became president — she attended the COP26 in Glasgow last November — visiting France and Belgium, from where she is returning with a bag full of goodies for Tanzanians.

On the sidelines of this year’s One Ocean Summit in Brest, President Samia signed three financing agreements with France totalling €259 million ($294.4 million). The deal, also overseen by Franck Riester, Minister Delegate in charge of Foreign Trade and Attractiveness, and Rémy Rioux, chief executive of the French Development Agency (AFD), is meant to facilitate access to finance for the agricultural sector in Tanzania. The AFD extended a €80 million ($90.9 million) sovereign loan and another €1 million ($1.1 million) grant for technical assistance to strengthen the Tanzania Agricultural Development Bank in its role in financing the agriculture sector.

President Samia then flew to Brussels, where she met with one of the government’s harshest critics, Chadema’s deputy party leader and presidential candidate in the 2020 election, Tundu Lissu, who has been in exile in Belgium following an assassination attempt in Dodoma in 2017.
The Wednesday meeting gave the clearest signal yet that the fiery legislator and lawyer may return to Tanzania soon.

A press release and pictures of both leaders were widely circulated online, triggering a debate on the implications of the apparent rapprochement.

Reaching out
Mr Lissu, who spoke to The EastAfrican on phone from Brussels, said he was the one who sought the meeting with the head of state.

“When I learnt that President Samia was coming to Belgium for the African Union-European Union meeting, I contacted her people and requested to meet with her,” he said. “As you are aware, I am in exile courtesy of the bad leadership of her predecessor John Pombe Magufuli.”

He said he asked the president to invite him to Tanzania.

“I am ready to return home. All I need from her is a public commitment, a public invitation that I am free to go and that I can be safe. I can work with her as the vice-chairman of Chadema,” said Mr Lissu.

The camaraderie in the photos shows two politicians who have mutual respect. In fact, when Mr Lissu was flown to Nairobi Hospital after gunmen sprayed his vehicle with bullets in Dodoma, hitting him 16 times, Mama Samia, then the vice-president, was the senior-most state official who visited him.

During the Brussels meeting, President Samia did not immediately respond to Mr Lissu’s demands, but she lent him an ear.

“I did not expect her to answer immediately, but she assured me that she would address my concerns,” Mr Lissu told The EastAfrican.

The call for a new Constitution was also part of the discussions. Incidentally, it is what took Chadema party leader Freeman Mbowe to court. He is facing six charges, including conspiracy to commit terrorism. The case has dragged on for more than six months, with frequent deferments. On Friday, a High Court ruled that the accused have a case to answer, paving the way for defence proceedings to begin on March 4. He and other Chadema members were arrested in Mwanza last July ahead of a planned public meeting to demand constitutional reforms.

Mr Lissu says the president has the power and authority to grant Tanzania a new Constitution and ensure free and fair elections. He is optimistic that President Samia is open to reforms.

Shrewd politician
But observers say President Samia is a shrewd politician, who knows how to exploit public relations opportunities like the one Mr Lissu offered, while still having an ace up her sleeve.

Her calm mien, in contrast with former president Magufuli’s abrasive “bulldozer” character has won her admiration, with hopes that she will heal the divisions in the country. Mr Lissu and ACT-Wazalendo leader Zitto Kabwe have expressed hope that the government will change course under her leadership.

“Tanzania will return to international and regional fold under her presidency. That misguided isolationism that defined Magufuli is untenable. It was costing the country dearly,” Mr Lissu told The EastAfrican last year.

When she took over office, she promised to call the opposition to dialogue. She also went on to take the chair of the CCM, shattering the sentiment in some quarters that the party hardliners would not give her an easy time. But she has moved to build a political base in the ruling party before any major rifts.

President Samia has also made headway in mending fences broken by her predecessor on the human-rights front. Her early days in power saw, among other things, the release of dozens of Tanzanians who spent years in detention without trial under Magufuli for non-bailable charges ranging from money laundering to economic crimes and terrorism.

Still, these changes have been greeted with cautious optimism. The laws Magufuli used to effect these decisions are still in place and President Samia says the time for constitutional review is not ripe. Although power play, grumblings of discontent and other intrigues within the CCM haven’t yet come to a head, pundits say they will inevitably do before the next General Election in which she is expected to defend her seat.

To this end, she has dealt firmly with the emerging dissent in her party, recently sacking ministers and officials who didn’t seem to toe the party line and those who have exhibited ambitions for a contest in the 2025 general election. The January Cabinet reshuffle saw the president’s loyalists make it into government.

CCM’s former publicity secretary Nape Nnauye, who had been sacked by Magufuli in 2017, bounced back as Information, Communications and Technology minister, and Ummy Mwalimu returned to the Health docket after a stint as the Minister of State in the President’s Office.

This month, Tulia Ackson was elected parliamentary Speaker after Job Ndugai was pushed out of the seat following a falling out with the president over his criticism of her borrowing trend. Mr Ndugai said that the country was in danger of being auctioned over its growing external debt.

Tanzania’s national debt rose by almost 20 percent last year as President Samia ramped up borrowing to fund infrastructure projects. Public debt increased by $6.1 billion to $37.1 billion in 2021, according to the Bank of Tanzania. In January, Mr Ndugai bowed to growing pressure from CCM to resign.

Recently, she appointed Zuhura Yunus, a veteran journalist, as director of Presidential Communications.

The provincial administration has also been populated with women administrators although their ratio is still lower than that of men. This is part of President Samia’s efforts to achieve gender equity in her administration. She says her aim is to achieve a 50:50 ratio.

On media, a week ago, Samia lifted a ban on four newspapers that were shut down by Magufuli. Tanzania Daima, Mawio, Mwanahalisi and Mseto were said to have been troublemakers and unethical when they lost their licences.

Information Minister Nape Nnauye told editors in Dar es Salaam that the licences were restored as part of the country’s continued efforts to support civil liberties.

“It’s good to start a new chapter,” he said.

But serious concerns about the perceived reforms remain. For one, the draconian rules are still in the statute and can be deployed by the state at any time.

In 2016, Tanzania enacted the Media Services Act that allowed the government to shut down media houses, or suspend publications and broadcasts. It was followed with a clampdown, including demanding registration from YouTubers and bloggers as well as restricting cue-ins by local TV stations to global channels. Newspapers touching on sensitive issues were quickly shut down.

The International Press Institute (IPI), an association of editors, media executives and leading journalists, and which had initially criticised the clampdown, has welcomed the new reforms but called for further action to ensure oppressive laws are repealed.

“Lawmakers must urgently bring Tanzania’s media laws in line with international standards to prevent the threat of censorship in the future,” said Ravi Prasad, IPI Director of Advocacy. “In addition, attacks against journalists in recent years must be the subject of serious and thorough investigations to prevent impunity.”

When she came to power, President Samia called on public officials to stop harassing journalists, reassured the country of the freedom of expression and directed the lifting of bans on media. At a briefing in Dar es Salaam in April 2021, she said the media should be allowed to operate freely as long as they work within the law. This week in Europe, she reiterated the same in an interview with DW Swahili Service.

The president’s approach of meeting with heads of state and organisations has opened up and strengthened diplomatic relations and reinforced her political influence across the region and beyond. From the early days of her administration, she indicated that she would pursue economic partnerships.

From holding meetings with key players in the global economy to visits to Uganda, Kenya, Rwanda, Burundi and Mozambique, she has been repairing ties with the outside world.

Will the same charm hold off the campaign for law reforms and expansion of the democratic space? Will she repeal laws that she could deploy to shore up against her rivals?