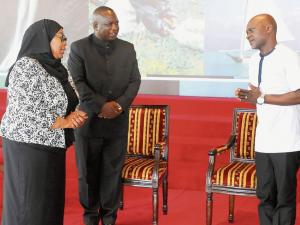 Dar es Salaam. The government is coming up with a holistic approach in an effort to streamline operations of petty traders who are popularly known as Machinga.

In the approach, which was revealed by President Samia Suluhu Hassan yesterday, the government will complete the construction of a modern market at Kariakoo within 18 months.

The market, which is being built after the one that was razed by fire last year, will accommodate more traders, but at the same time, the government is also looking for a contractor to build another market at Jangwani area.

“I empathise with you for the loss caused by the fires, however the government teams are conducting an investigation into identifying the cause and what action to take to prevent further occurrences,” said President Hassan when she met Machinga leaders at the Dar es Salaam State House yesterday.

In an effort to address capital woes, the government says it will avail Sh5 billion from the Covid-19 funds kit and channel the same to a Savings and Credit Cooperative Society (Saccos) for Machinga.
The government, President Hassan said, will train the petty traders on how to manage Saccos and grow their savings.

“I direct municipal councils to come up with programmes that will identify how to include traders in the 10 percent council loans for the youth, women and people with disability while at the same time, all directors should include in their budgets a special fund to improve working areas for petty traders,” she said.

The head of state appreciated petty traders’ efforts to start businesses as well as the decision to start a database that recognises all traders in that category and their workstations.

She said through the database, it will be easy for them to be recognised and thus enabling the government to start a system that will identify their requirements and how to serve them.

The country’s leader said within 18 months, a new market at Kariakoo will be built to accommodate traders who were relocated after last year’s fire accident at the market as well as newcomers.

“Initially, there were 2,500 petty traders but once it’s completed it will accommodate 4,000 or more traders,” she said.

According to her, the government wants modern markets with infrastructure that can enable traders to work around the clock, providing all types of services including digital systems that will make their work easier.

On the request to have the National Housing Corporation (NHC) build malls for Machingas to work in, she said the government will have discussions with business people to fund the project and come up with a plan on how to charge the traders rent.

“We aim to recognize you to grow from petty trader to middle income traders, so I urge you to end the business with shop owners who use you to sell their products so that they avoid paying taxes, do your own business to grow from where you are and be the next taxpayers,” she said.

“They are happy with your decision to allow them to continue with business at Karume market,” he said.

For his part, Dar es Salaam Traders Chairman Yusup Namoto hailed President Hassan for the Covid-19 loan she was able to access that enabled petty traders to acquire Sh5 billion to improve their businesses.

“The government’s decision to relocate us to planned areas went well amidst challenges especially as a majority of areas lack infrastructure including water, electricity and roads,” he said