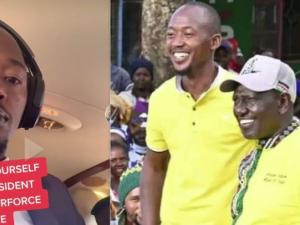 On Saturday, October 29, 2022, videos emerged of recordings of both President William Ruto and his deputy, Rigathi Gachagua, while travelling in their official aircraft to various destinations.

To the chagrin of some Kenyans, these videos were recorded by personnel in the leaders’ entourage and shared on social media.
In one of the videos, Deputy President Rigathi Gachagua was recorded inside the official aeroplane of the Office of the Deputy President by someone sitting opposite him.
Everyone else seated in the same cabin section as DP Gachagua was also captured in the video.

Four interesting facts about late Angela Chibalonza’s teen daughter, Wonder
In another video, President Ruto was recorded by someone seated beside him while in the military chopper that transports the President.
“Imagine youself with President Ruto in Air Force One,” the man who recorded the video captioned it as he also revealed his own face.

Also read: Why Nameless hasn’t given Wahu a push gift, she responds – Exclusive
As both videos went viral, harsh criticism arose regarding those who hung around the national leaders, claiming they breached their privacy and broke the rules associated with the military.

Kenyan journalist Saddique Shaban was among the critical voices who wondered what law enforcement was doing as people freely exposed the leaders.
“William Ruto core VIP ring squad members share videos online onboard the military aircraft. When will the intelligence services finally act and secure the privacy of their VIPs? Why do those privileged enough to share VIP transportation vessels see the need to film onboard and share visuals of their hosts in the cabin?

The security and safety of PORK should never be compromised in the hands of dumb people working for the head of state. Social media feedback allegedly points to Mwala MP Eng. Vincent Musyoka Kawaya as the perpetrator of this security breach.
It would, henceforth, appear that the Kenya Air Force Commander need to personally vet and approve who fles with the Commander-In-Chief,” said Mr Shaban.

Regarding the video recording of DP Gachagua onboard the Kenya Air Force aircraft, Mr Shaban noted that during the tenure of former presidents Moi (late), Kibaki and Uhuru, security and PR never allowed passengers travelling with them to film onboard spaces and share them with the public.

Also read: Exclusive: I hid my pregnancy from my daughters – Wahu
Other Kenyans online also expressed outrage over the breach of privacy occasioned by those hanging around the leaders. Many demanded to know why the person recorded President Ruto in an instance of security breach and allegedly breaching confidentiality.

The aforementioned law is prescribed as Acts prejudicial to Republic. One of the acts listed in this section is of any person who “makes any plan that is calculated or be or might be or is intended to be directly or indirectly useful to a foreign power or disaffected person.”

Kenyans are also prohibited from taking any photos or videos of military installations. In this instance, this prohibition was ignored in the above cases where the national leaders were recorded in their official military aircraft while on official duty.
https://nairobinews.nation.africa/security-breach-outrage-as-videos-of-p...