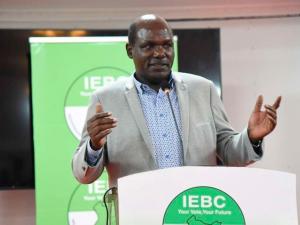 Four officials of the electoral agency, who were found holding a meeting at the home of a former member of the county assembly (MCA) aspirant in Homa Bay, in western Kenya, have been fired.

The Independent Electoral and Boundaries Commission (IEBC) showed the officials the door for committing an election offence.

Three others, two in Webuye East and another in Webuye West, both in Bungoma County, were also sacked for similar reasons, IEBC chairman Wafula Chebukati said during an election preparedness update in Nairobi on Monday.

Homa Bay County IEBC returning officer Fredrick Apopa said the officials were wrong to attend the meeting. “You cannot be in a meeting with politicians when the law requires you to be neutral,” he said.

Mr Apopa said the officials were reported to have been meeting an MCA and a parliamentary aspirant from a political party, among others.

But residents of Kanyikela who stormed the meeting and took the suspects to a police station claimed they were planning how to manipulate Tuesday's elections.

Mr Apopa said investigators are looking into the allegations and will take necessary action if the suspects are found to have committed an electoral offence.

Some of the people to be questioned are residents who took the suspects to the Ndhiwa Police Station.

“The outcome of the investigation will determine whether they will be charged. It will be up to the police and the office of the Director of Public Prosecutions to take legal action against them,” the IEBC official said.

Residents disrupted the meeting and frog-matched the suspects to the police station.

Other IEBC officials attending the meeting escaped after noticing the crowd surging towards the home.

Mr Apopa said the IEBC has a system for filling a vacancy created by the dismissal of an election worker.

It was not clear what the group was discussing.