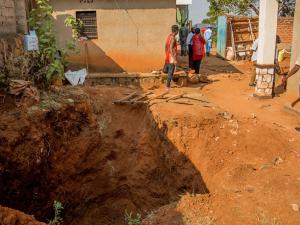 Remains of over 100 victims of the Genocide have so far been exhumed from a backyard of a home belonging to a man convicted for genocide against the Tutsi. More are suspected to still be in the compound.The remains were discovered and exhumed in the past few days from two pits found in the home of one François Simbizi in Mpano village, Cyivugiza cell of Nyamirambo sector in Nyarugenge District.

The exhuming started on August 15.

During the Genocide in 1994, Simbizi is said to have set up a roadblock near his house where Interahamwe militia converged daily to kill every passerby found to be a Tutsi fleeing their homes.

Many of the victims were residents from the neighbourhood which is located opposite Kigali Stadium in Nyamirambo.

Simbizi died prison years after he was convicted for Genocide.

So far, Rwanda Investigation Bureau has arrested six people suspected of hiding information about these remains, which has for years denied the victims a right to a dignified final resting place.

Lack of this information has also affected Genocide survivors, whose family members are among the victim, and have been desperate searching for them for the past 26 years.

Among the arrested include Simbizi’s wife, Petronille Mukakarera and a local leader who has been in grassroots leadership in the area since after the Genocide, according to Emmy Ngabonziza, the Executive Administrator of Nyarugenge District.

Ngabonziza explained that the information was shared by one of the residents on August 13, 2020, who told one of the tenants in houses belonging to the Simbizi family.

According to officials, hiding this information, family members knew of the existence of the remains but they had bribed local leaders in the area to keep the information from survivors and authorities.

Exhuming the bodies started on August 15, 2020, and they have temporarily been taken to Cyivugiza Primary School before they can be given a decent burial.

Speaking to The New Times Egide Nkuranga, the vice-president of Ibuka, the umbrella organization for Genocide survivors, said that knowingly hiding the remains of the victims for over 26 years is one of the worst examples of denial of the Genocide against the Tutsi.

He condemned the culture and urged justice institutions to do their job.

“We always repeat this message even during commemoration urging people who have information about the genocide victims’ whereabouts to come forth and share it,” he said.

“Some committed and witnessed the 1994 genocide against the Tutsi but they are still hiding the information. Others are people who bought certain houses built on pits with genocide victims’ remains and when they get information about it, they hide information so that their houses do not get destroyed,” he said stressing the law punishing genocide ideology will apply.

Ibuka recently told The New Times that the remains of over 10,000 victims of the 1994 Genocide against the Tutsi that were exhumed from different parts of the country have not been able to be given a decent burial due to Covid-19.