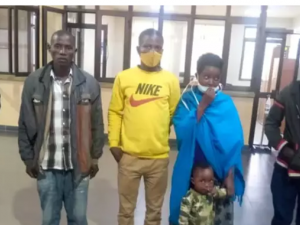 Six Rwandans (including a two-year-old toddler) were on Thursday, September 10, dumped at the border with Uganda after being illegally detained in the country for weeks.
The group which includes four men, a lady and a child were dumped by Ugandan authorities at Kagitumba One-Stop Border Post in Nyagatare District and were received by Rwandan immigration officers.

This is the latest in a series of what has increasingly become frequent illegal deportations from Uganda where Rwandans are dumped at the border after months of illegal detention.

During their detention, they were accused of being spies for Rwanda.

As has been the case in previous instances, the deportees said they had gone to Uganda at different times and for different reasons, with some having lived and worked there for years and not affiliated to any Rwandan security organs.

The deportees include 33-year-old Etienne Twizeriyakare from Kayonza District who went to Uganda in 2011 to work as a fisherman. He was arrested by Uganda People’s Defence Force soldiers in Mbarara in June this year where he had been held without trial.

Another Rwandan, 29-year-old Valens Niyishoborabyose from Burera District was held in Uganda for weeks at Makenke Military Barracks where he was severely beaten and had money taken from him.

The only woman in the group, 25-year-old Marie-Flora Kayiganwa from Huye District was also held in Makenke Military Barracks in Mbarara for weeks without trial. Kayiganwa was detained with her two-year-old son.

Others include Aloys Kabera and Jean-Baptiste Mpakaniye who were held in Mbarara Police Station.

This is the latest of the deportations which have been going on for three years now where Rwandan Nationals are roughed up by Ugandan security personnel, tortured before being deported without due process.

While in detention many are beaten, tortured and dispossessed of their valuables, including money.

Hundreds of Rwandan nationals have been dumped at Rwanda-Uganda border crossings over the last few months, with many saying they had been tortured and held illegally without trial.

Illegal detention of Rwandan nationals is one of the issues that has seen strained relations between the two countries. Kampala’s alleged continued support to anti-Kigali militia groups bent on destabilising Rwanda has also been listed as a key pain point.

Both countries held a series of talks in 2019 and 2020 with little success.