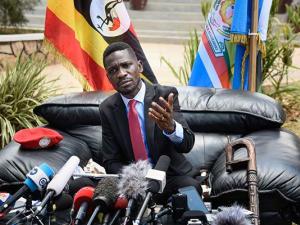 Six broadcast stations in Uganda risk having their licenses revoked after an investigation by the industry regulator found that they breached broadcasting standards while covering events that followed the arrest of pop star and presidential aspirant Bobi Wine.

The politician's supporters held demonstrations in April in the capital, Kampala, after he was detained.

Bobi Wine, whose real name is Robert Kyagulanyi, has been a thorn in the side of President Yoweri Museveni since he was elected as an MP in 2017.

He has been arrested several times and is currently facing a charge of "annoying" the president.

The broadcasts are part of a trend of media reports that contain "misrepresentation of information, views, facts and events in a manner that was likely to mislead or cause alarm to the public," UCC said.

The UCC report also recommended that the stations train their news reporters, producers and editors in professional reporting, to ensure that they comply with the law and broadcast standards.