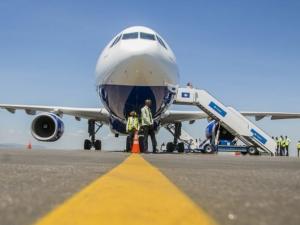 A RwandAir plane at Kigali International Airport. Lack of skills are limiting efforts to open up African skies.
Aviation experts are currently meeting in Kigali to kick start a process on implementing a Single African Air Transport Market (SAATM) which has seen a low uptake on the African continent.

Primarily, the goal of the SAATM was to fully implement the 1999 Yamoussoukro Decision.
This means that all participants agree to lift market access restrictions for airlines, remove restrictions on ownership, grant each other extended air traffic rights (first through fifth freedoms, not affecting cabotage rights), and liberalise flight frequency and capacity limits.

Some African governments and airlines have criticized the project. Especially smaller airlines, as well as the Ugandan government, allege that the agreement would lead to few big airlines dominating the market, thus stifling competition.

The African Development Bank, among other analysts, predicted that the SAATM would lead to cheaper flights, greater passenger volumes and economic benefits.
So far only 33 countries have signed the agreement to open their air spaces and this has concerned the aviation experts especially at a time when the continent is implementing African Continental Free Trade Area which will enable intra- Africa trade and free movement of goods and services of which aviation is a key player.

The International Air Transport Association (IATA) commended the African Union (AU) for launching the single market, but warned that more work would be required to effectively implement the policy.

In order to understand the reason behind the delays and challenges in implementing the SATM, the Common Market for Eastern and Southern Africa (COMESA) Secretariat on behalf of other Regional Economic Regions (EAC, IGAD, IOC and SADC) and the European Union (EU) signed a Grant Contribution Agreement amounting to €8million for the Support to Air Transport Sector Development (SATSD) in the Eastern Africa, Southern Africa and Indian Ocean (EA-SA-IO) Region.

The outcomes of the SATSD baseline study and training needs analysis were presented this August 29, 2022 at a validation workshop showing the biggest challenges in implementation of open air space agreement.

Dr. Eyden Samunderu, a leading aviation professional expert said that “One the major findings being lack of investment in specialized and continuous training for aviation staff and many governments are not willing to invest in this”.
Samunderu showed that the limited training and capacity, in all aviation departments, currently provided is in-house but only remedial and not structured on policy level as in other best performing aviation sectors in Europe.

Now that the operationalisation of the agreement has taken far too long Rwanda’s Silas Udahemuka, the Director-General Rwanda Civil Aviation Authority and Chairman of the African civil aviation commission said that it is not rocket science needed to implement the agreement but willingness to liberalise air spaces.
“I will be happy if we get tangible results here. The minds and knowledge we have here is enough to put into good use. This is something that we can implement for the next generation so that we don’t have to continue asking for funding,” Udahemuka said while opening the 3- day validation workshops.
The main objective of the two workshops is to validate the outcomes of both the baseline study and training need analysis consultancy for the SATSD programme.

Bernard Dzawanda, the COMESA regional Senior Transport Economist said that the best that can be done with the two studies is to have at least the SAATAM operationalised and this will bring about the strengthened regulatory and institutional capacity of civil aviation institutions and improved air navigation efficiency in the EA-SA-IO region.

Dzawanda said that other five studies will also be commissioned along the year, with one of them focusing on the gender aspect in aviation, a study which will assess the current gender gaps and causes, in the sector.

Emmanuel M. Butera, a Consumer Protection Specialist said that there is still need to advocate at all levels for open air spaces to enable more African citizens to do business as the continent moves to implement the free trade agreement.
https://www.ktpress.rw/2022/08/skills-gaps-holding-back-open-skies-for-a...