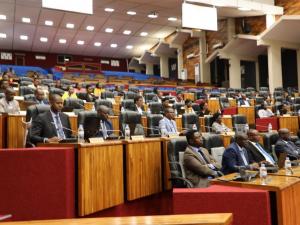 The Chamber of Deputies on Monday rejected a proposed reproductive health bill that was tabled to allow teenagers from 15 years to access to contraceptive services, sparking a public debate on social media.

The bill was proposed by Members of parliament and aimed at tackling the issue of early teenage pregnancies and reduce sexually transmitted diseases among teenagers – key issues which are currently on the increase in the country.
The bill was introduced by MPs Gamariel Mbonimana (team leader), Speciose Ayinkamiye (deputy), Eugene Mussolini, Alice Muzana, and Phoebe Kanyange.

MP Mbonimana said that: “Research shows that 92% of the teenage pregnancies are between the age of 15 and 18 years thus a need to protect the children in this age bracket by giving them the right to access reproductive health services,”

Currently a child is considered as one below 18 years and the regulations on access to reproductive health services requires that a child is accompanied by their parents or caretaker to have access to such a service.

The civil society health organisation like Health Development Initiative (HDI Rwanda) have called for this aspect to be reconsidered and removed saying it doesn’t give the teenagers their full rights to access sexual reproductive health services.
MP Mbonimana said, “We seek that this regulation is scrapped as proposed in this draft bill,”

A majority of the 55 MPS present were not impressed by the proposed bill and voted it out (54.4% No, 32.7% Yes, and 12.8% abstained) subsequently asking that the bill is returned to the team so that it is well prepared sighting concerns that this doesn’t solve the actual problem.
“The family has failed to do its duties of protecting child. So, what are the measures in place to avoid this from happening, asked MP Emmanuel Bugingo.

MP Eugene Barikana said that the country has a culture and societal values and laws to protect the community and children thus no need to leave the decision to children.

Christine Mukabunani said that it is not easy to just pass a bill without considering that this issue has been discussed with healthcare organisation and there has not been a proper explanation on how effective this service can be provided.
“We know that these services are not being provided properly to adults, so there is no certainty that this will be effective among children below age. We need to reconsider this,” said Mukabunani.

Christian Habimana, used social media to say that the bill was not passed because of the religious affiliations and sentiments otherwise it should be passed because it has value to the youth now and the future.

Another Social media user said that “On the one hand, a child under 18 years of age can be impulsive and do mischief, but on the other hand, I feel that the child would choose who to take with them if he doesn’t trust their parent, but not go alone. There are some parents who are violent,”
https://www.ktpress.rw/2022/10/social-media-reacts-after-parliament-reje...