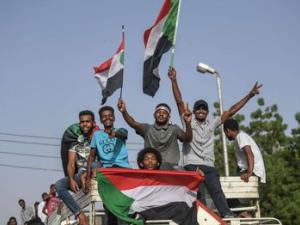 The African Union has given Sudan’s military rulers another 60 days to hand over power to a civilian authority or face suspension, after an earlier deadline was missed.

In a communiqué "PSC/PR/COMM.(DCCCXLVI)"issued on Tuesday, April 30 the A.U. Peace and Security Council said it “notes with deep regret, however, that the Sudanese Military has not stepped aside and has not handed over power to a civilian-led transitional Authority” within the initial deadline.

But it announced “an additional period of up to 60 days for the military in The Sudan to hand over power to a civilian-led Transitional Authority.”

The PSC said it “reiterates its conviction that a military-led transition in the Sudan will be totally unacceptable and contrary to the will and legitimate aspirations, to democratic institutions and processes, as well as respect for human rights and freedoms of the Sudanese people.”

Sudanese protesters are growing increasingly frustrated with the army, and have called a mass protest on Thursday, accusing the military leaders of not being serious about handing power to civilians.

The military has been pushing for a 10-member council including seven military representatives and three civilians.

Protesters meanwhile want a majority of civilians on a 15-member joint council with seven military representatives.

The A.U. granted the extension after acknowledging “the gradual progress made so far by the Sudanese parties in the negotiations towards an agreement on the modalities, structures and timelines of a civilian-led Transitional Authority.”