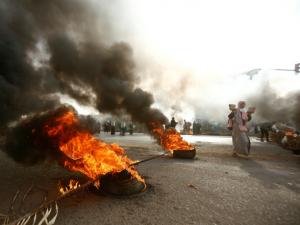 Sudan's military rulers forcefully broke up a weeks-long sit-in outside Khartoum's army headquarters on Monday leaving at least 13 dead, a doctors' committee said as gunfire echoed from the site.

Heavily armed security forces in pick-up trucks mounted with machine guns were deployed in large numbers all around the capital, while gunshots were heard from the protest site by an AFP journalist.

The United States and Britain called for an end to the crackdown on demonstrators, who want the generals behind the overthrow of veteran president Omar al-Bashir to hand over to civilian rule.

The Central Committee of Sudanese Doctors, which is close to the protesters, updated the death toll "raising the number of martyrs to 13" in a Facebook statement.

The military council has denied multiple reports of their forces violently dispersing the sit-in in front of army headquarters, as protesters took to the streets in towns around the country.

But protest leaders said the site had been cleared of demonstrators.

"The Rapid Support Forces and the army and police and militia battalions dispersed the peaceful sit-in," the Alliance for Freedom and Change, the protesters' umbrella group, said in a statement.

Outside the army headquarters "there is no one, but the pure bodies of our martyrs that it has not been possible to evacuate from the site".

The Sudanese Professionals Association (SPA), which spearheaded nationwide protests that started in December, said it amounted to a "bloody massacre" and hundreds of people had been wounded.

It called on Sudanese to take part in "total civil disobedience" to topple the military council.

It said another hospital near the site of the sit-in was surrounded and volunteers were prevented from reaching it.

Protests erupted in towns across Sudan in response to the violence in Khartoum.

"Now the streets are closed (with barricades made) from stone and the chant is going round 'Just fall, that's all, the whole Council'," a witness in Port Sudan on the Red Sea said.