South Sudan and holdout rebels commit to truce this week 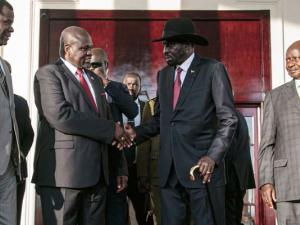 South Sudan's government and opposition groups who had snubbed an earlier peace deal say they had agreed to a ceasefire from Wednesday, after peace talks in Rome.

Members of the South Sudan Opposition Alliance (SSOMA) and an envoy of the government in Juba said they had signed a document on Sunday committing to a December 2017 peace deal to "avoid any further armed confrontation across the country".

"We are ashamed this peace has eluded us," Pa'Gan Amum Okiech, a member of SSOMA's leadership council and interim chairman of another rebel group, the Real-APLM group, said Monday.

"We agree to begin this process of dialogue to reach comprehensive solutions to the crisis," Amum Okiech told journalists, stressing that those solutions would be "inclusive."

Progress on a more recent agreement in September 2018 calling for Kiir to form a transitional unity government with Machar has been delayed over a host of unresolved issues.

Rebel groups within the SSOMA refused to sign it because it did not address "root causes" of the war, Amum Okiech said.

Sticking points include the return of refugees, the integration of rebel forces into the army, and land issues, such as compensation for the destruction of property during the conflict.

Machar is due in Juba on Tuesday for another round of talks with Kiir.

The ceasefire signed on Sunday was mediated by the Community of Sant'Egidio, a lay Catholic organisation with ties to the Vatican.

It engages in diplomatic and peace efforts, including organising the safe passage to Europe of refugees from war-torn areas like Syria.

Both Amum Okiech and the head of the government delegation, Barnaba Marial Benjamin, praised Pope Francis for his efforts in pushing for a diplomatic solution to South Sudan's conflict.

"This credit goes to his Holiness Pope Francis," said Marial Benjamin, who cited the pontiff's organisation of a meeting between Kiir and Machar in April at the Vatican, in which Francis knelt to kiss their feet, imploring for peace.

"Your kneeling in front of our leaders has brought peace to South Sudan," he said.

Pope Francis has expressed an interest in travelling to South Sudan and a trip could be announced soon.

During a Papal Mass in November, he exhorted the faithful to pray for the country, and in his Christmas address, sent wishes of "peace and prosperity" to South Sudan.

About 380,000 people have died in the conflict and some four million have fled their homes.

Fears have grown in recent weeks that a fragile peace deal will not hold after delays in implementing a unity government and ongoing disagreements.

While peace has largely held across the country, fighting has continued in the Central Equatoria region between government troops and the National Salvation Front, whose leader Thomas Cirillo Swaka signed the agreement in Rome.