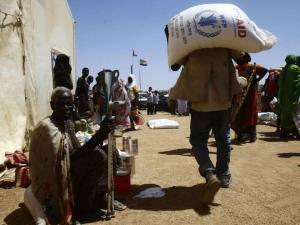 WFP Country Director for South Sudan, Matthew Hollingworth, said the convoy was carrying food assistance from Bor town, Jonglei State to Melut and Malakal towns in Upper Nile when it was attacked.

“WFP condemns in the strongest terms any attack on humanitarian workers and contractors, who risk their lives delivering much-needed food assistance to the most vulnerable people,” said Mr Hollingworth.

He called for unimpeded humanitarian access, respect for international law and conditions that allow humanitarian workers to do their jobs in safety without hindrances.

“Our thoughts are with the families of the missing crew member, and we wish a speedy recovery to those who suffered injuries.

“Their dedication will not be forgotten. We call on the South Sudanese authorities to hold those responsible for this unspeakable violence accountable for their actions,” he said.

The food was intended for displaced persons who have lost their homes and crops as a result of ongoing floods in the country.

According to the UN, over 800,000 people have been affected by floods in South Sudan, on top of many months of sub-national violence and years of conflict that have ravaged people’s homes and caused widespread hunger and malnutrition.