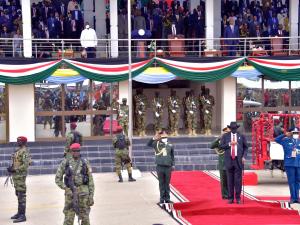 South Sudan’s unity government has begun unifying rival armed groups in a programme meant to create a professional military for the country.

On Tuesday, Juba witnessed the first unification exercise after more than 20,000 armed fighters graduated from months-long training to transition to professional soldiers.

The programme is part of the provisions in the 2018 peace deal between the ruling Sudan People’s Liberation Movement and rebels and political groups, which helped quell a five-year deadly civil war in which nearly 400,000 people died by creating power-sharing arrangements.

According to Tut Gatluak, the National Security Advisor, the over 20,000-strong force graduated from five training centres with varying specialities.

President Salva Kiir Mayardiit termed the military programme the most challenging yet in implementing the peace agreement.

In one incident, the programme risked collapsing after soldiers deserted the training centres due to congestion and lack of food.

“You have suffered for over two years awaiting graduation. I thank you for waiting and for your tolerance. What you went through is part of courage and strength to defend your country and your people,” Mr Kiir told the gathering attended by Ugandan President Yoweri Museveni.

“To the graduating soldiers, from today, you are not a military wing to any party to the conflict. And as the President, I am your commander-in-chief; they are no more commanders in chief. And you will be taking instructions from me personally,” Mr Kiir said.

The President added that he would work with regional countries to ensure the forces get more training to enhance their professional capacity.

“We are not going back to war. If you have such thinking in your mind that you are being trained to go back to war, no, forget that, it will never happen,” he added.

The graduation came weeks after the government deferred elections by two years, citing the delayed unification of the army, electoral reforms and financial constraints.

Thousands of former rebels swore an oath of loyalty in a ceremony held under tight security at the John Garang Mausoleum in Juba -- built in honour of South Sudan’s independence hero who died in 2005.

Edmund Yakani, a civil society signatory to the peace deal, appealed to the forces to remain independent and avoid being manipulated by political leaders.

“These are good soldiers, and if we add good money to their pockets, unknown gunmen will disappear,” he told The EastAfrican.

“This was a long-waited day in the country’s route to peace. Its establishment will account for inclusivity and diversity in the security sector. This isn’t the end but a new beginning and will require continuous commitment by the coalition government to fund, employ and maintain these forces.

“The urgent problem is breaking the circle of violence across the country. Today’s graduation opens an opportunity for deployment to counter violence and provision of safety and protection for civilians,” he said.

“The unification is the backbone of the agreement. Despite the challenges, the graduation shows the coalition government is for peace, and we expect the momentum to be maintained to phase two of the graduation of unified forces.

“It’s with my hope and expectation that the event will provide a timely boost and much remains to be done in all the chapters, especially the permanent constitutional making progress, legislative reforms, and provisions of free and fair elections,” he said.

“The inclusive process of consultation with various peace parties and civil society was very courageous in the peace implementation process of critical chapters. Security sector transformation is the bedrock and the enabler of the roadmap towards the realisation of peace agreement implementation and uniting the nation,” he said.

Another 30,000 forces are also due to graduate in the coming days in training camps around the country, some of which are affected by floods.