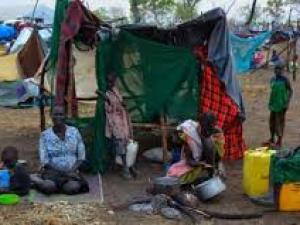 The almost 70.8 million people forcibly displaced is 2.3 million more than the previous year, according to the agency's annual Global Trends report.

The figure is also double the level recorded 20 years ago.The number averaged out to 37,000 new displacements every day.

"What we are seeing in these figures is further confirmation of a longer-term rising trend in the number of people needing safety from war, conflict and persecution," said the UN High Commissioner for Refugees, Filippo Grandi.

The number also represents a sharp increase in the number of displaced people as a proportion of the world's population. According to figures kept since the 1951 Refugee Convention, its previous peak was in 1992, at 3.7 per 1,000 of the population. By 2018, the number had more than doubled to 9.3.

According to the UN Refugee Agency, the actual figure for 2018 is likely to be higher, as the number of people displaced by the Venezuela crisis is only partly reflected in the statistics.

More than two thirds of all refugees worldwide came from Syria, Afghanistan, South Sudan, Myanmar and Somalia. Syria had a considerably higher number than any other country with 6.7 million, followed by Afghanistan with 2.7 million.

At the year’s end, DRC was the sixth largest country of origin of refugees, with 720,300 refugees.

The number of refugees from Burundi, the tenth largest refugee-producing country, decreased during 2018 from 439,300 at the start of the year to 387,900 at the end. The decrease was mainly due to returns (45,500) and as a result of verification exercises that often reflect spontaneous departures. Nearly all of these refugees (98 per cent) were located in countries in the region, such as Tanzania, Rwanda and DRC.