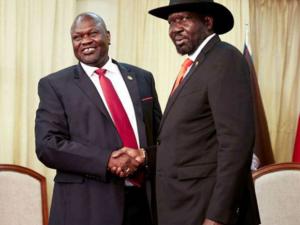 South Sudan's President Salva Kiir has struck a deal with former foe Riek Machar that will pave the way for their rival armed forces to merge, a cabinet minister said on Saturday, in a potential breakthrough for the lumbering peace process.

The world's newest nation has struggled with chronic instability since independence in 2011, with Kiir and Vice President Machar locked in an uneasy coalition following the end of a five-year civil war.

Saturday's announcement holds out hope that the country's fragile peace process can shake off years of drift and bickering and result in the creation of a unified armed forces command, a key component of the 2018 truce agreement.

However, in a sign of lingering distrust between the two sides and the potential for any deal to break down, a spokesman for Machar denied to AFP that an agreement had been reached.

Martin Elia Lomuro, the minister of cabinet affairs, had earlier told a press conference that the pair had agreed on a power-sharing deal to split control of the leadership of the country's national security command.

"We have now come to the correct approach and it is agreed that we will now... share 60:40 percent," said Lomuro, with Kiir's party holding the majority share and the remainder to be divided between Machar and a handful of opposition parties.
The deal will help "to create one unified security sector that will be dedicated to the people of South Sudan rather than to a political party or political group", he said.

But Puok Both Baluang, Machar's spokesman, told AFP the news was "not true", adding that the two parties had earlier discussed a 50:50 breakup.

The leadership of the national security command refers to the commander-in-chief of the country's national forces as well as the heads of army and police units.

If confirmed, the long-overdue agreement will open the door for Kiir and Machar's rival troops to merge into one army -- a critical safeguard against future conflict that can also help bring stability to lawless areas of the country. The 2018 ceasefire and power-sharing deal ended a conflict that has cost almost 400,000 lives, but doubts persisted, with many of Machar's top cadres complaining they had lost out under the arrangement with the ruling party.

Earlier this month foes in Machar's party said they had ousted him as leader -- a move his allies dismissed as a "failed coup", but which raised fears for the already fragile peace process.

Machar said the squabbles were aimed at derailing the formation of a unified armed forces command.