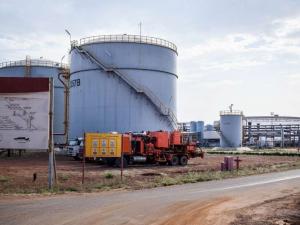 South Sudanese oil marketing giant Trinity Energy Ltd is set to inject $10 million worth of new investments in its Kenyan operations and also plans to build a $500 million crude oil refinery in South Sudan to serve the region with refined petroleum products.

The firm, which controls close to 40 per cent of the South Sudanese oil market, is planning a 40,000 barrels per day (bpd) modular refinery at Paloch in the oil-rich Upper Nile State, with the potential of expanding capacity to 200,000bpd, as well as petroleum storage facilities at Nesitu, in the south of the country.

South Sudan has the third-largest oil reserves on the continent after Libya and Nigeria, estimated at 3.5 billion barrels, with much of it yet to explored.

The refinery, to be built by American firm Chemex, is expected to be operational in two to three years, with plans to start distribution of refined petroleum products to Kenya, Uganda, Tanzania and the Democratic Republic of Congo by road, owing to the absence of railway and pipeline connectivity between these countries.

The EastAfrican has learnt that the feasibility study and the designs for the proposed refinery have already been concluded with Afreximbank together with big regional banks operating in Juba expected to provide financing.

“We are already making steady progress towards our refinery project. We have already identified and secured land for the refinery in Paloch. We have engaged Chemex of the United States as the project manager for this project. Separately we are close to tying up project preparatory work financing from Afreximbank and this will aid in the engineering and design work for the facility,” the firm’s chief executive Robert Mdeza told The EastAfrican in an interview.

“Various discussions are ongoing with financiers for the various facets of our business. We have opted for segmented approach so that we can kick off with the low-hanging opportunities such as our working capital requirements as we work our way towards financing for the larger projects like the refinery,” he added.

Trinity’s refinery will upstage Uganda, where the commencement of the construction of the $4 billion refinery at Kabaale in Hoima district has been pushed to 2025 following the delay in the conclusion of the Final Investment Decision on the basin-wide upstream oil development project.

Initially, the FID was expected to be reached in September and the projected completed in three years.

The Kabaale refinery is expected to process an estimated 60,000 barrels of oil per day with an initial output of 30,000 barrels per day at the time of the commissioning of the project.

Uganda, Kenya, Tanzania, Rwanda and Burundi had been allocated a combined 40 per cent shareholding in the refinery, translating into an eight per cent stake for each, with 60 per cent of the shares reserved for private investors. However, only Tanzania took up its full share of eight per cent while Kenya took up 2.5 per cent.

Rwanda and Burundi had not expressed interest in the facility by the expiry of the extended period set aside to do so in 2016. As a result, Uganda was compelled to take up an additional 11.5 per cent shareholding in the Hoima-based refinery, bringing its total shareholding to 19.5 per cent, with French oil giant Total SA taking up a 10 per cent stake.

Trinity Energy is not new to the region, and was incorporated in 2013 with majority ownership by Trinity Holdings which is 90 per cent owned by a local South Sudanese businessman Akol Emmanuel Ayii.

“We are now embarking on our next phase of growth with major projects lined up in South Sudan including a 40,000bpd refinery as well as growing our footprint outside of South Sudan. This will be instrumental in our plans to enhance energy stability particularly for South Sudan and our landlocked neighbours,” said Mr Mdeza.

The country is seeking to increase crude oil production to pre-conflict levels of 350,000bpd, which is expected to significantly contribute to economic growth and sustainability.

Last year, Africa accounted for more than 7.9 million bpd in oil production, an output level that has significantly dropped from nearly 10 million bpd in the period between 2005 and 2010 largely due to lower global oil prices.

The construction of the refinery in Paloch is expected to strengthen the firm’s bid of expanding its operations across the East and Central African region through a combination of acquisitions and greenfield investments as part of its five-year (2020-2024) growth and expansion plan.

“Our strategy is to have a strong presence in East and Central Africa within the next four years, before moving to Southern Africa. This is part of our Pan African growth agenda. We will immediately focus on neighbouring countries such as Uganda, Ethiopia, Eastern DR Congo and the Central African Republic, which like us are landlocked countries that require energy security to support economic growth and future development activities,” said Mr Mdeza.

“If there is an opportunity for an acquisition we shall look at them. We are keeping our options open some of which could be starting from the ground and some of which will be. So our options are open, we are going for both greenfield investments and acquisitions where possible,” he added.

According to Mr Mdeza, Kenya is also an important market for Trinity Energy Ltd due to the fact that the country is the biggest petroleum market in the region as well as the key entry point for petroleum products destined for the region.

Currently, the firm plans to revive its subsidiary in Kenya, which would play a significant role in its bid to expand its operations to other East African countries.