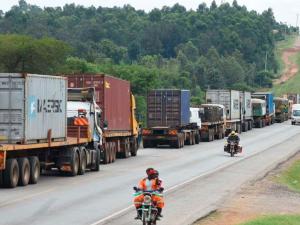 At the Elegu-Nimule border point, on the Uganda-South Sudan border, dozens of drivers have refused to continue with the journey into the capital Juba, demanding a security escort.

This has caused a delay in delivery of goods.

Economists warn that this could harm the economy, especially for a country that is still struggling to come out of civil war and which has also been greatly affected by the Covid-19 pandemic.

Trouble started last week when a Ugandan lobby for truck drivers claimed eight of their members had been killed in brutal highway robberies. Then Kenyan truckers’ associations said three drivers had died in similar circumstances, others went missing and trucks were torched in South Sudan.

Dennis Ombok, the CEO of the Kenya Transporters Association, the lobby for truck owners, said they had advised members to avoid the Juba-Nimule highway due to insecurity.

He asked those already on the way to communicate with their clients to collect their goods at the Customs yard in Elegu border.

David Masinde, the Chairman of the Kenya Drivers Association, said their colleagues were murdered by unknown thugs who mounted illegal roadblocks.

“Their trucks were set on fire. Two of the drivers were burnt beyond recognition. Two others went missing. Thanks to God, one of them has contacted us saying he is safe,” Mr Masinde said.

Gen Okot was replaced while he was on assignment to help address the pile up of goods at the Nimule border; a product of a boycott by drivers who have protested the increased attacks on the Nimule-Juba road.

Last week, Gen Okot told reporters he planned to deploy his troops to escort trucks along the Juba-Nimule, and Yei to Kaya roads, among others.

But that did soothe the worried business community.

South Sudan relies on the highway that runs from Nimule border with Uganda to Juba for supply of food, petroleum products and other imported commodities from Kenya, Uganda or beyond. It is one of the few roads tarmacked in the country.

The protests over the attacks have led to traders in Juba or other towns not receiving their goods on time and having to pay more for the extended time taken to transport the goods.

At the Nimule border crossing with Uganda, South Sudanese traders have been forced to pick up their delivery from warehouses at the border, instead of avoiding the cost, as is tradition, when goods are delivered to their premises.

Ms Christine Simon, a trader who runs a salon and boutique in Juba’s Custom Market, says she hasn’t received her business goods worth $350 which were ordered a week ago.

“My stock is almost finished. In fact, some of my stock of goods like dresses and men’s shirts have run out of wholesale stores, making it difficult for me to continue running my business.

“I have no assurance of the date and the time when I will receive my [new] stock. This is a disheartening situation,” she said in Juba last Wednesday.

Taban Musa, a wholesaler who specialises in cement business, said he is worried he might make losses if his goods do not arrive in time.

“As you can see, I am almost running out of stock. I [might have] to increase the prices by charging each bag from $10 to $15 if things don’t change,” he said.

Prof Abraham Matooc, a senior economist, warned that millions of people in South Sudan could face food shortage if delivery of goods continues to be delayed.

He added that the attacks could also cause regional tension as citizens of other countries are attacked on the highway, as well as affect regional trade.

The Juba-Nimule highway was built in 2012 just a year after the country gained independence from Sudan following 21 years of brutal civil wars.

The road connects the South Sudanese capital Juba to the border with Uganda, the main route Kenyan and Ugandan drivers use to ferry goods to South Sudan.

Since conflict broke out in 2013 and 2016, many South Sudan highways connecting the country to the region were closed due to insecurity, leaving only the Juba-Nimule road.

In September 2016, at least seven people were killed in attacks on the road. President Salva Kiir then directed the National Security Service to provide security escorts for all passenger buses using the road. Uganda’s military also guarded their drivers at the height of the war.

In June 2017, a convoy carrying civilians escorted by the then Sudan People’s Liberation Army (SPLA) was ambushed along the highway. The incident left at least 14 people killed, including high-ranking military officials allied to the regime in Juba.