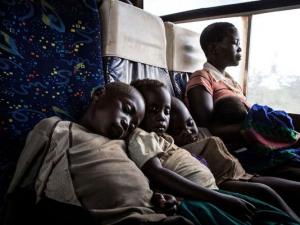 Refugees are flooding into the remote northeast of the Democratic Republic of Congo from South Sudan as a September 2018 peace deal hangs in the balance.

The refugees, sheltering in the town of Aru in Ituri province, fled fighting along the border between South Sudan and Uganda, the DRC's neighbour to the east.

Fighting has persisted between government forces and rebels of the National Salvation Front who reject the peace accord between South Sudan's President Salva Kiir and his arch-foe Riek Machar.

"Among the refugees... there are a lot of widows, as well as unaccompanied children," said Andreas Kirchhof, spokesman of the UN refugee agency UNHCR in the DRC.

Authorities say 554 people have arrived since the start of the month.

They are among nearly 100,000 South Sudanese refugees in the DRC's Haut Uele and Ituri provinces, according to the UNHCR.

Kiir said last week that a six-month delay agreed with his rivals for the formation of a unity government was not enough time to resolve outstanding issues.

The warring parties in the conflict now in its sixth year had agreed to delay the formation of a power-sharing government from May 12 after implementation of the peace deal ran aground.

Machar had pushed for the delay, while Kiir wanted to move forward with the unity government and deal with outstanding issues later.

Under the deal, Kiir would remain president while Machar would regain the vice presidency.