South Sudan risks cycle of war as plunder continues despite US, UK sanctions 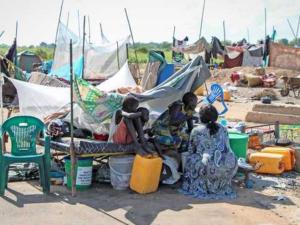 South Sudan’s journey to recovery from conflict may take longer than planned as the country’s elites dodge US sanctions and continue to bleed the national coffers.

Now civil society organisations and activists say looting of national monies with no repercussions may create a cycle of war as politicians and other influence peddlers jostle to get into or close to government.

The theft, which has continued unabated, even when the country was at war, means that targeted sanctions imposed on some of the elites in the country may have had nearly zero impact.

The details are contained in a recently released report by a UN Commission on Human Rights in South Sudan, and an admission by the country’s Auditor-General, showing that as much as $73 million may have been siphoned off government coffers by individuals including those proscribed by the US government.

The Human Rights Watch said the theft had deprived the country of critical funding as well as undermined “the government’s ability to meet the needs of millions who are currently food insecure and to protect the rights to health and education.”

President held hostage
Transparency International lists the country as the second worst on the continent — only ahead of Somalia — in graft.

“There has been a clique that keeps President Kiir hostage. Why should the president fear members of his Cabinet and cannot hold them to account?” asked Edmund Yakani, who heads the Community Empowerment for Progress Organisation, a civic, human rights and peacebuilding organisation in Juba.

“Sometimes, corrupt officials are much more rewarded than the non-corrupt ones and this is legitimising corruption as a best practice and the communities have now started condoning the disease,” said Mr Yakani.

The looting of government money has been prevalent since Independence in 2011, with President Kiir admitting five years ago that more than $4 billion had been stolen.

However, when the UN report titled “Human Rights Violations and Related Economic Crimes in the Republic of South Sudan” came out recently, Juba accused its authors of conspiracy to destabilise the country.

“This country is sovereign. If the government has mismanaged anything, it’s only the people of South Sudan who can hold this government accountable, not external forces,” Martin Elia Lomuro, South Sudan’s Information Minister told the media.

“These are the organisations that are sponsored not to see political stability in South Sudan and they will move from one thing to the other, from human rights to corruption, from corruption to something else,” Mr Lomuro argued.

In December 2019, Lomuro, then Cabinet Affairs minister, and his Defence counterpart at the time Kuol Manyang Juuk, were sanctioned by the US for fomenting conflict in the country.

The UN report cites one incident in 2018 which reflects the extent of looting in South Sudan. A single payment worth $30 million or about 21.6 percent of South Sudan’s total budget was paid to a businessman known as Ashram Seed Ahmed al-Cardinal for “use of goods and services” and “capital expenditure” ostensibly for a whole year.

After details emerged of their loot, the US Treasury sanctioned Al-Cardinal and his business associate Kur Ajing Ater for their involvement in procurement fraud with senior government officials.

“These South Sudanese elites and corrupt government officials have drained state coffers and usurped the country’s resources with impunity. Al-Cardinal and Ajing leverage their businesses and political connections to engage in corruption at great expense to the South Sudanese people,” said Sigal Mandelker, US Treasury Under Secretary for Terrorism and Financial Intelligence at the time, calling on Juba to impose transparent measures and enforce accountability.

Last week, a Conference Paper of the Commission on Human Rights in South Sudan said there were “reasonable grounds to believe that further payments may have taken place” in spite of the sanctions.

While the UN team says the Commission will conduct its own investigations to determine actual amount, it said it had been frustrated by stonewalling by both government officials and banks involved in remitting the money.

Money laundering
“The lack of response by the government to requests for information (in addition to sanctions) together provide reasonable grounds to believe that these four payments, in full or part, each represented the misappropriation of government funds,” saying the refusal to co-operate by authorities was indicative of “trade-based money laundering.”

In February last year, the government of national unity was formed following two years of delay. It brought together bitter rivals into a coalition to act as a transitional government. But the very folks fingered for looting have survived, including government ministers, by using proxies, which the UN report says makes the figure of looted monies at $73 million seem conservative. The presidents’ associates are alleged to have shared out $39 million in just two months.

Following the release of the report, President Kiir ordered his Finance and Economic Planning Minister Athian Diing to cancel a Sovereign Guarantee transaction worth $650 million. Officials have been mum on the reasons behind the cancellation of a deal with a firm known as Amok General Trading Company.

But the country’s Auditor-General revealed in his report early in September that there were “ineligible payments amounting to $2,134,080 made to individual accounts and $849,830 irregularly spent on salary arrears from June 2019 to July 2020 in foreign missions.” In fact, the audit says government officials frustrated or refused to provide proof of payments amounting to $468,287.

“The perpetrators should be held accountable. The sad moment is that the people that are supposed to hold them to account are the very corrupt leaders who are also engaged in looting resources,” Mr Yakani told The EastAfrican on Wednesday.

“The only approach is the upcoming parliament should be the right House to bring to book those involved in corruption,” he added.

South Sudan relies on oil for most of its revenues, as well as donor funding. Since the unity government was formed, the country has increased its oil production to more than 200,000 barrels per day. But there exists an informal system of revenue collection, the report says, which includes official payments going to private pockets.

In October 2020, the United Nations Commission on Human Rights accused some South Sudanese politicians and senior government officials of embezzling at least $36 million since 2016.

In December the same year, The Sentry, a non-profit organisation led by US actor George Clooney, reported that some South Sudanese leaders laundered money and engaged in grand corruption through networks in the United Kingdom. The UK has since imposed sanctions on some of the South Sudanese so-called cartels.

With the theft continuing, the UN report says: “This plundering also continues to fuel political competition amongst elites, and is a key driver of the ongoing conflict, violations and serious crimes, jeopardising the prospects for sustainable peace.”

With no response from the government, it means the Commission, established by the UN Human Rights Council in 2016, and which has had annual extensions on mandate, may be piling reports that received no action.