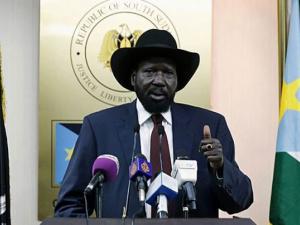 South Sudan has said it will bar people traveling outside the country with cash exceeding $10,000 (about Sh23 million) in a bid to minimise cash outflows as Juba struggles to stabilise its weakened economy.

Michael Makuei Lueth, Minister of Information and Broadcasting, on Tuesday said the new measure was recommended by the cabinet after findings by the economic cluster committee set up by President Salva Kiir to investigate mismanagement of non-oil revenue collection.

"The maximum amount that could be allowed for travellers abroad is only $10,000 because it is realised that most people travel with lots of money. Any other amount should be done through official banks," he told journalists after the weekly cabinet meeting in Juba.

South Sudan's economy is reeling amid hyperinflation which has seen the South Sudanese Pound (SSP) increasingly depreciate against the US dollar over the years since the signing of the 2018 revitalised peace deal to end over six years of conflict.

In addition, the oil revenue earned by oil-dependent South Sudan has reduced due to Covid-19, forcing oil-producing countries to cut production due to a drop in global prices.

The Central Bank of South Sudan in August announced that its foreign reserves were at their lowest point, constraining efforts to achieve economic recovery.

He disclosed that the government also agreed to scrap tax exemption on non-essential goods entering the country in a bid to widen non-oil revenue collection.

"It was agreed that there should be no more tax exemptions which are taking away revenue from us," said Makuei.

The minister revealed that they have secured 250 million dollars from African Export and Import Bank (Afreximbank) to cushion the economy from the effects caused by the Covid-19 pandemic.

"This amount of cash will be used to cover all the costs and to facilitate payment of all outstanding debts and then after we start afresh from the very beginning. The payment of the loan will be in the form of oil and this will be in installments," said Makuei.

He also noted that they have approved 5 percent cash inducement to staff working in the various revenue-generating institutions to tame corruption and boost revenue collection.

"These revenue-generating institutions at times you find that there is misappropriation and as such, it is passed that 5 percent of whatever revenue generated by that institution should go to the working force at that institution. This would go to them as motivation so that they continue to produce more," said Makuei.