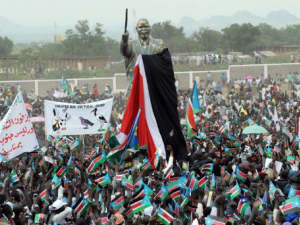 South Sudan’s nine years of independence may have become a story of sadness and ‘waste’, rather than freedom, some activists say.

As Juba marked independence day on July 9, critics pointed out that the objectives the Sudan’s People Liberation Army (SPLA) fought for with support from the local population and many international partners have not been achieved.

The country seceded from Sudan in July 2011, six months after a referendum by the residents of what was then known as southern Sudan, an autonomous region.

That step followed five decades of liberation struggle as the black-dominated south demanded greater freedom from Sudan in the north, dominated by Arabs.

South Sudan would plunge into a successive series of conflicts as leaders fought over influence and political power just two years later in 2013. The turn of events left citizens longing for the freedom they had yearned for with independence.

“My father died during the liberation struggle, he fought in various wars and he was killed in the Kapoeta front,” said Deng Madut, a resident in Juba.

“Since independence, I have not seen any development. This simply says his death went in vain.”

According to Wani Tombe, a 32-year-old businessman in the capital Juba, little has been achieved since the country gained independence from Khartoum.

“When I listen to Dr Garang’s CPA speeches, I feel like crying, all the great things planned were never implemented, we still don’t have roads, no piped water system. Locals don’t access schools and war continues to follow us,” said Mr Wani, referring to the leader of SPLA John Garang, who died in a helicopter crash in 2005.

“If foreigners feel more at home than the citizens by moving freely in all the ten States yet citizens have some red zones that they cannot visit due to fear of their lives, this is not what our forefathers fought for,” said Gak Malek, a youth activist in Juba.

Christina Kide, the chairperson of South Sudan Youth Organisation Coalition, says many citizens have lost hope in the past and current governments because of their failure to fulfill promises they stated earlier.

“As we speak now, many South Sudanese feel like going back to Sudan. This is because they feel safer in the countries they seek refuge in.

“Now, we don’t even know how far this agreement will go, we need a nation where is there democracy, free of corruption, and a country where rule of law is respected,” said Ms Kide.

Only last February did peace return to South after President Salva Kiir, his nemesis Riek Machar and other rebel parties formed a government of national unity.

The government has since named ten governors for the ten states created under the peace deal. But the legislative assembly needed to reform laws is yet to be formed, creating fear the country still hangs in precarious conditions.

Rajaf Mohad, the executive director of the Organisation for Responsive Governance, attributes the failure to achieve the past objectives to lack of a clear agenda to drive the nation.

“We have not seen much progress in terms of infrastructure development. The improvement in livelihoods of the civil population and the safety of civilians has been threatened.

“This is because we don't have a clear plan to govern the nation. There is corruption, but there is no plan to address it. There is violence but no strategy to address it,” said Mr Mohad.

He called on political leaders to dialogue and find a clear strategy for a better country.

Prof Kuol Nyuon, the Dean of School of Social and Economics at the University of Juba, also urged leaders to work together to build a clear agenda for the nation.

“The president should this time be able to hold to account all people working with him for everything they do. And anybody found to have committed any crime should be investigated and prosecuted.

“The peace parties should also wholeheartedly implement the peace deal because this is the only bond that will redefine the coming years. They should not be wasted like the past years since independence,” said Prof Nyuon.

In his Independence Day speech, David Shearer, the head of United Nations Mission in South Sudan (Unmiss) reiterated his calls to political leaders to unswervingly implement the 2018 peace deal.

“On the 9th anniversary, we should take the opportunity to remember the immense suffering caused by war but also recognise the positive impact that the peace agreement has had on communities across the country.

“Hundreds, even thousands, of people are alive today because of the significant reduction in political violence. Displaced families are returning home to plant crops and rebuild their lives. Humanitarian agencies are reaching more communities in need,” said Mr Shearer.

After the decades-long civil war, South Sudan seceded from Sudan in 2011 but fighting broke out in 2013 throwing the country into turmoil and severely dented its economic development. Millions were displaced with more than 400,000 losing their lives.