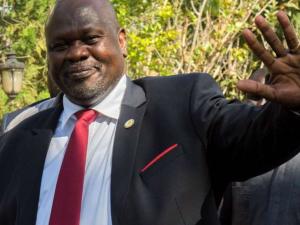 South Sudan's main opposition party said Tuesday they were withdrawing from a body overseeing the young nation's lumbering peace process, dealing a fresh blow to its elusive quest for stability.

The Sudan People's Liberation Movement in Opposition (SPLM/A-IO) -- led by Vice President Riek Machar -- had pulled out of the peace monitoring mechanism to protest continued "unprovoked" attacks of its bases by its "peace partner", the party said.

"We see no point in participating in non-productive meetings where issues are raised but not resolved," the party said in a statement.

"Our areas are under attack from our peace partner without action from those mandated to hold them accountable for such violations," it said, adding that the latest assault had been on Monday in the north-east of the country.

The withdrawal adds to fissures between factions loyal to Machar and President Salva Kiir that have dragged out the implementation of a fragile 2018 peace agreement that ended fighting between the two men.

South Sudan -- the world's newest nation -- has suffered from chronic instability since independence in 2011, spending almost half of its life as a nation at war.

The country was in 2013 plunged into a brutal five-year civil war between forces loyal to Kiir and Machar that cost almost 400,000 lives and uprooted millions from their homes.

Two years ago, the two men formed a unity government, cementing a peace deal signed in 2018 that brought an end to the conflict.

But since then, South Sudan has lurched from crisis to crisis, battling flooding, hunger, as well as violence and political bickering as the promises of the peace agreement have failed to materialise.

The UN has repeatedly criticised South Sudan's leadership for its role in stoking violence, cracking down on political freedoms and plundering public coffers.

At least 440 civilians were killed in brutal fighting between rival militias in the country's southwest between June and September last year, a joint report by the United Nations Mission in South Sudan (UNMISS) and the UN Human Rights Office said earlier this month.

It blamed forces loyal to Kiir and rival troops under Machar, as well as "their respective affiliated militias", for the violence.

The report came on the heels of a UN warning that the country risked a return to war, with interethnic violence and political infighting threatening to undo even limited progress.