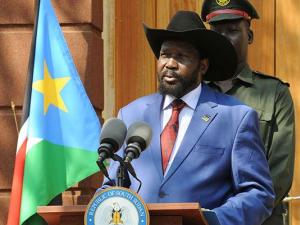 A senior South Sudan government official has said the country supports the 32 states governing system, and any moves to increase or decrease them will cause instability.

Speaking at a two-day Igad consultative meeting in Juba on Sunday, Minister for Cabinet Affairs, Dr Martin Elia Lomuro, said; “These states have been established and they are working. We feel that to disrupt this number of states would be a disaster to the country, it will cost not only instability but insecurity. The people of those states are already used to it, they have their own governments.”

The two-day Igad consultative meeting was facilitated by South Africa’s Deputy President David Mabuza and is expected to lead to a final status on the number and boundaries of states.

In October, Dr Elia revealed that the creation of the 32 states was a political move to counter the SPLM-IO’s suggestion of 21 states.

When South Sudan gained Independence from Sudan in 2011, it had 10 states. In 2015, during peace talks in Ethiopia, the SPLM-IO proposed 21 federal states, based the old districts created by the British colonial administration. The government strongly opposed this move.

And in August 2015, the parties signed the Agreement on the Resolution of the Conflict in South Sudan (A-ARCSS) which acknowledged the initial 10 states.

However, in a surprise move in October 2015, President Salva Kiir issued a decree creating 28 states, saying it was a popular demand by the people.

He said it was meant to devolve power rather than centralising governance in Juba, a move that was condemned as unconstitutional by political parties, civil society organisations and members of the international community.

It was also termed by SPLM-IO as a unilateral decision.

Gradually, the states have increased to the current 32.

Last year, President Kiir dared those calling for the withdrawal of the decree to go to the states and tell the communities to return to the pre-Independence 10 states.

He insisted that his actions resonate with the demand of the people to develop their locality through the mobilisation of local and states resources.