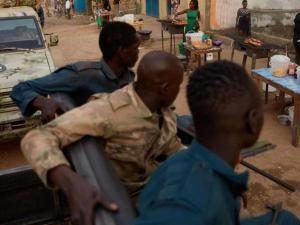 A new report released by a human rights group has described South Sudan’s National Security Detention Centre as an avenue for torture and death.

A testimonial titled “What Crime Was I Paying For?” released on Friday by Human Rights Watch described the Juba-based National Security Facility, commonly known as the Blue-House, as a place full of abuses, including crimes against humanity.

“One hot evening in May 2017, Adiang received a call from an acquaintance who told him security officers planned to arrest him. The caller, not a regular source or a friend, asked to speak to him about it over a cup of tea at a cafe in Juba town.

“The call unsettled the 37-year-old journalist Adiang Malish, not his real name. For a moment he hesitated, thinking about the threatening calls. He decided to go anyway,” said Human Rights Watch.

HRW stated that Adiang didn’t report the threats because he doubts police would have investigated them.

“I also didn’t think there was a connection between the threats and this invitation for tea. Within minutes of arriving at the cafe, two cars pulled up, and National Security Service officers in uniform and armed with AK-47 rifles stormed in and asked him to confirm his identity.

“When I did, they pushed me to the ground, kicked me, and hit me with their rifles. They put a hood over my head and carried me into a vehicle for a long fast drive. I lay on my stomach in the car with thoughts rushing in my mind,” Adiang narrated.

Adiang revealed that his tea invitation led to a nine-month ordeal in detention, with hopes of no life at a detention centre where he survived on one daily non-balanced diet beans meal.

“I thought I would die. My children would never know what happened to me. The NSS interrogative officers asked me why I was a journalist, why I spoke to opposition politicians, why I wrote this article or that article,” said the father of four who was released in 2018 without any charges, after undergoing torture and abuses.

Adiang, who is still undergoing treatment outside South Sudan due to spinal injuries suffered while at the detention centre, said that once given a chance, he would ensure South Sudan is a stronger democracy for future generations, where journalism can drive change.

The National Security Service was established in 2011 as an intelligence agency to collect information and advise relevant authorities.

But then, in the NSS Act of 2014, the agency was given broad powers of arrest, detention, search, and seizure without effective civilian or judicial oversight, according to Human Rights Watch.

In the Thursday report, the rights group claims that the NSS has used these powers to arbitrarily detain people – including political critics, journalists, human rights defenders, aid workers, and others – and then hold them in appalling conditions without medical care or adequate food, and abuse them.

“This Human Rights Watch investigation found that many South Sudanese, government critics, and activists, live in fear of the NSS, which operates unchecked. South Sudan’s government should repeal the extensive police powers of the NSS and ensure justice for victims.

“South Sudan’s future should be built for diverse and dissenting voices like Adiang’s, not for citizens to live in fear of a sadistic, lawless security service,” said HRW.

The Juba-based NSS Facility – Blue-House – has served as home for months and years to government critics and civil society activists such as Peter Bair Ajak who this year fled to the United States, claiming his life was in danger.

Others include businessman Kerbino Wol who was killed in Lakes State this year by President Kiir’s forces after declaring his armed rebel movement, 7th October Movement, to fight for the rights of marginalised citizens.