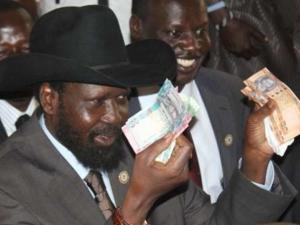 South Sudan’s currency drastically depreciated against the dollar last week, just after the government announced plans to change it, an indication that more currency hoarders had surrendered the now seemingly old notes.

On October 9, the country’s Council of Ministers decided to change the national currency in an attempt to mop up hoarded cash it claims is to blame for the decline of the economy, according to the Information Minister.

This forced many traders in Juba, Rumbek and Wau, among other major regional towns across South Sudan to close shop, saying they are confused about low demand by the consumers and the pricing to use.

Dharuai Mabor Teny, member of parliament representing Lakes State, said the president was to blame for the economic meltdown, arguing that the leadership could have rescued the economic sector a long time ago if they had appointed experts to lead the monetary institutions.

Mr Dharuai said the meltdown was also to be blamed on public financial institutions aggravated by the gross corruption that has persisted in the system for the past decade.

“You know, our leaders derailed the economy. It started when they murdered our currency by making devaluation,” he alleged.

The MP noted that nothing will change if the president does not sack the current economic committees and form committees led by experts.

Ustaz Deng Makur, head of Economics department at the University of Juba, said the current market fluctuation was triggered by the Cabinet’s decision to change the currency.

“The rise in the dollar is happening because people want to store their money in dollars,” he explained.

“In economics, if the demand for anything is too high then it can definitely facilitate the rise,” Mr Makur added.

“We have a consumer economy, so the change of currency is not going to help our economy because the money will continue to fluctuate,” the economist said.

“Then later if they still want to change the currency, they could just go for a partial change which means they can change only big denomination notes like 500 or 100 than changing the whole currency range.”

Makuei Makuei Lueth, South Sudan’s government spokesperson in an extraordinary Cabinet meeting held on Wednesday said the government is planning to inject into the market more hard currency to rescue the ailing economy.