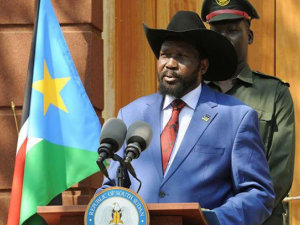 He, however, did not appoint governors for two states – Jonglei and Upper Nile – and did not state why.

Weeks ago, South Sudan Opposition Alliance (SSOA) – a party to the peace accord – rejected Jonglei State, saying their initial demand was Upper Nile. But Dr. Riek Machar’s group, Sudanese Peoples' Liberation Movement in Opposition (SPLM-IO), says the Upper Nile belongs to them due to their prominence in the area.

Parties to the peace accord were to have a say in the administration of states.

In a Presidential decree read on State-Run TV SSBC on Monday, President Kiir reappointed Luiz Labong as the governor of Eastern Equatoria State. Mr Labong has served as a governor since his appointment in 2010.

Mr Joseph Monytuil was appointed governor of Unity State. He was previously the governor of former Northern Liech State.

Sarah Cleto Rial, the only female governor, was assigned to Ghar-el-Ghazel, while Alfred Futio (the SPLM-IO sector commander) was appointed the governor for Western Equatoria State.

According to the 2018 peace deal, the government will fully be established when parliament is constituted.